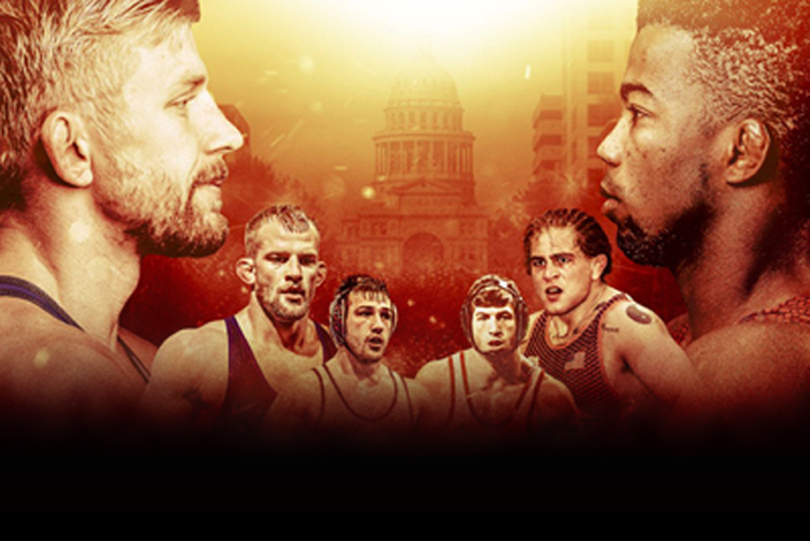 Wrestling News: This Saturday, in Austin, Texas, FloWrestling is hosting a card with five compelling men’s freestyle matches. The main event features two-time World champion Kyle Dake squaring off with two-time World champion Frank Chamizo of Italy. While Taylor Miller will examine that matchup tomorrow in her #FreestyleFriday feature, let’s take a look at the other four matches on the card.

Kicking off the event will be collegiate wrestlers Vito Arujau of Cornell and Sammy Alvarez of Rutgers. Competing at 140 pounds should give an edge to Alvarez, who wrestled at 133 pounds during the college season. Arujau wrestled at 125 pounds during the 2018-2019 season before taking an Olympic redshirt while competing in freestyle at 57 kg.

Alvarez had a strong season as a true freshman for Rutgers, compiling a 26-10 record and earning the No. 10 seed at the NCAA Tournament. He was named a 2020 NWCA Second-Team All-American. However, unlike Arujau, he does not have much freestyle experience.

Even with size advantage, Alvarez will face an uphill battle against the seasoned Arujau.

Two 2020 NWCA First-Team All-Americans will collide in the card’s second match. Jack Mueller, who finished his collegiate career and is now training with the NYC RTC, is a 2019 NCAA finalist and finished sixth at the 2016 NCAA Tournament at 125 pounds. Roman Bravo-Young just wrapped up his sophomore year at Penn State and placed eighth at 133 pounds at the 2019 NCAA Tournament.

Both of these wrestlers have established themselves in freestyle as well. Mueller placed fifth at the 2018 U23 World Championships in Bucharest and won Cadet and Junior Fargo titles. He also placed fourth at the 2019 Senior World Team Trials Challenge Tournament.

Bravo-Young was a 2016 Cadet World Team member and a 2019 Junior Pan Am champion. He is also a 2015 Fargo Cadet champion in both freestyle and Greco-Roman.

Of the matches on this card, this one seems the hardest to predict. However, given that Mueller has reached a medal match at the U23 World Championships, I would give him the edge.

When he was wrestling, Darrion Caldwell was one of the most exciting competitors on the mat. Caldwell was a 2009 NCAA champion for NC State and also earned All-American status in 2008, placing fifth. Caldwell aggravated a shoulder injury at the NCAA tournament his senior year, causing him to medically forfeit out of the tournament.

After finishing his college career Caldwell went into mixed martial arts. He currently competes for Bellator and holds a 15-3 record. Caldwell was the Bellator Bantamweight World Champion from October 2017 to June 2019.

Luke Pletcher was named a 2020 NWCA First-Team All-American for Ohio State after a stellar senior season. Pletcher, who placed fourth at the NCAA Tournament in 2018 and 2019, put together a 26-1 record, avenging his only loss to Penn State’s Nick Lee in the Big Ten finals. Pletcher is now a volunteer assistant at Pittsburgh and a resident athlete with the Pittsburgh Wrestling Club RTC.

While he doesn’t have the freestyle credentials of some of the other wrestlers on this card, Pletcher has been solid nonetheless. He was a 2017 UWW Nationals freestyle champion and more recently finished second at the 2019 U23 World Team Trials.

While Caldwell was a heck of a wrestler, it seems almost disrespectful to pick someone who hasn’t competed in the sport in over a decade to beat Pletcher, who is just reaching his prime.

In 2018, David Taylor won a World title and was selected as “Best Wrestler of the Year” in men’s freestyle by United World Wrestling. While he was unable to defend his title due to injury, Taylor made his return to competition this March, winning the 2020 Pan Am Olympic qualifier in dominant fashion. Taylor was a college legend for Penn State where he was a four-time NCAA finalist, two-time NCAA champion and a two-time Dan Hodge Trophy winner.

Myles Martin had a fantastic career for Ohio State earning All-American status four-times, making two NCAA finals and winning a national title in 2016. Martin competed on the U23 World Team in 2018. Since graduating, he has seen substantial success, winning the 2020 Henry Deglane Grand Prix in France and finishing runner-up at both the 2019 Bill Farrell International and the 2019 Seniors Nationals. Martin also placed third at World Team Trials Challenge Tournament and sixth at the 2019 U.S. Open. His biggest freestyle win to date came over Alex Dieringer, 6-4, in the Senior Nationals semifinals.

While Martin looks to be on track for a long and successful senior career, it will take an incredible effort to defeat Taylor, who has already established himself as one of the best wrestlers on the planet.

The event will begin this Saturday at 8 pm EST and can be streamed live on FloWrestling.