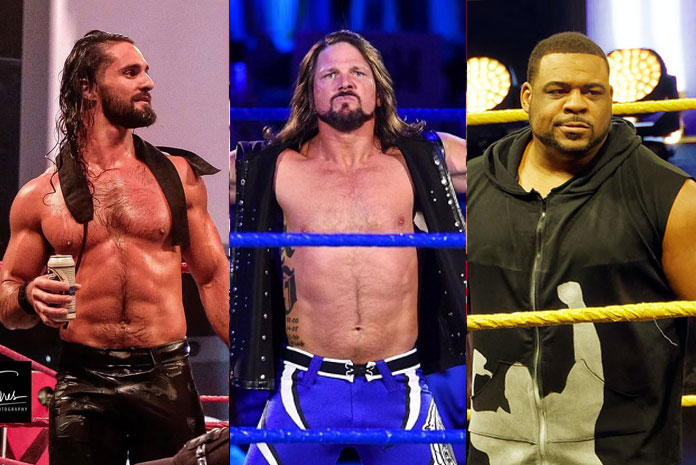 October 30, 2020 0Comments 983Views 0Likes
WWE Survivor Series is scheduled to take place on 22nd November, Sunday, Live from Amway Center, Orlando. WWE has officially announced six matches for this event that will take place three weeks from now. It is all about brand vs brand, RAW vs Smackdown, Champion vs Champion and many more.
But one match that everybody wants to see will be a traditional RAW vs Smackdown match — 5M v 5M traditional elimination match where both the brands will take on each other and make this night more exciting to watch out.
Let us check out the top 5 WWE Superstars who could “Captain” their respective sides during the 5M v 5M traditional elimination match.
# 5. AJ Styles:
The Phenomenal one surely is someone who always plays a crucial role in such matches as he did in the past. Once again AJ Styles is all set to feature in this year’s traditional Survivor Series elimination match. Styles became the first superstar to claim his position in a RAW traditional survivor series this year after defeating Jeff Hardy in a colossal battle. And it could not be wrong enough to say if AJ Styles will lead his team RAW as Captain of the side.
# 4. Keith Lee:
The impressive and dominant figure Keith Lee is all set to make his second appearance on this traditional Survivor Series battle, and this time he will be looking to add his dominance on red brand if he gets the chance to lead his team that would be eye-opening to watch out. His NXT experience will lead him to take on the blue brand more eagerly.
# 3. Sheamus:
“The Celetic Warrior ” Sheamus has been part of WWE for more than 10 years now but the Celetic Warrior has not got that kind of aura in WWE which he keeps looking for. However, last week on RAW Sheamus got an impressive win over Matt Riddle to claim his place in this year’s traditional Survivor Series match. Sheamus would not mind if he gets the opportunity to lead his team and beat Smackdown team under his captaincy.
# 2. Rey Mysterio:
“The master of 619” Rey Mysterio can join this year’s Survivor Series with Smackdown after he was traded to Smackdown from RAW. Rey Mysterio might join his son Domonik Mysterio in this battle as this week’s Smackdown will unveil the name of the superstars who will participate in this year’s survivor series , and take out against RAW. Having wrestling experience of over 20 years and more Rey Mysterio would be pleased if he was given this golden opportunity to perform in front of his son as a team captain of the side.
# 1. Seth Rollins:
There is no better place for Seth Rollins to become the captain of the Smackdown and lead his team against his former brand. As known by “Monday Night Messiah” soon to be called as “Friday Night Messiah”. He will be ready to enter in this year’s Survivor Series traditional match just a matter of fact that he will join it by this week on Friday Night Smackdown as the leading trump card for Smackdown. And who knows what if Rey Mysterio, Dominik Mysterio, Seth Rollins would compete in the same team and lead their team to a victory.
0
0
0
0
0
0
0