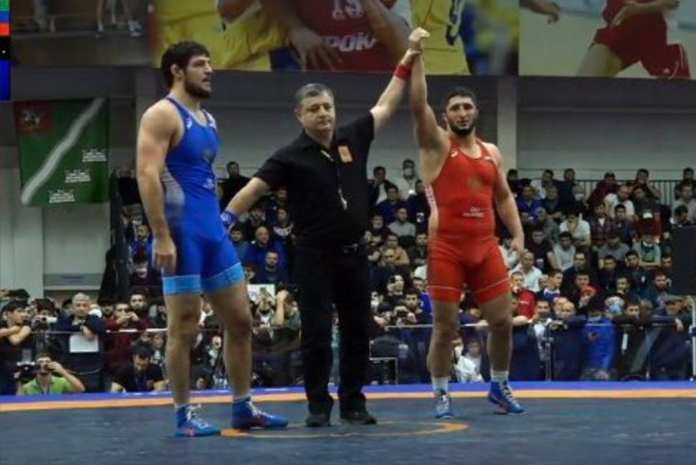 ooAbdulrashid Sadulaev won his fifth national championship gold medal on Sunday in Naro-Fominsk.  The Olympic champion Aslanbek Sotiev 8-2  to finish at the top of the podium in his comeback tournament.  After winning he claimed, the level of the nationals was equivalent to that of European or the worlds. “It was a championship which is no easier to win than the European of the World Championships,” he said.

“There are no emotions, it’s just the Russian championship, and my fifth gold medal. Of course, I had slightly different plans for 2020, but the Olympics moved to 2021, and now I only have preparations for the World Cup in my head, and I really hope that it will take place. I will prepare for my sixth World Championship,” he added.

Here is an excerpt from the interview:

WrestRUS: You had a very interesting opponent in the final.. Have you two worked together before?

Sadulaev: He came to the training camp at his own expense, and we stood in pairs. An obstinate guy, constantly attacks, I liked him even at the training camp – and I was not at all surprised by his reaching the final. I considered him a contender in our weight class. In general, the championship was not so easy, there are no passing fights, it was just one of those championships that is no easier to win than Europe or the world.

WrestRUS: Do you think you have found an interesting competition within Russia now?

Sadualev: It may well be that he is young, and I wish him good luck and health. It is interesting to fight with Aslanbek.

WrestRUS: You haven’t fought for a long time. How was it when you returned to the mat?

Sadulaev: Yes, since February, after the European Championship, my pause turned out to be shorter than that of other leaders. Once in my career, it already happened – after the Olympics in Rio, but then I rested a lot, and now at least once a day I was consistently exercised and kept myself in shape. Of course, there were certain difficulties during the pandemic: for two months we trained at home, then in nature, then on the beach, then in the mountains. In general, at the championship, I wanted to test what my body is capable of. Probably, I’m 50 percent ready today.

WrestRUS: Your main opponent in the foreseeable past, the American Kyle Snyder. But fans have also been talking about Mohammadian of Iran who won against Snyder at the Rome Rankings in January. How would you comment?

Sadulaev: Mohammadian is far from a new wrestler, we fought in the same weight at the 2014 world, after which he missed four years due to disqualification. I think we will meet at the World Championships. And Snyder’s defeats, I think, it means nothing – it’s quite American. This is due to the fact that they fight in any tournament, in any form, but they are always ready for the World Cup and the Olympics. So you can’t write him off.

WrestRUS: How did you feel about David Taylor’s comments on Instagram?

Sadulaev: I don’t know what he wanted? His weight is small. Again, this is so American. They love the show, apparently wanted to make money. But all this is not so interesting to me, the world championship is ahead, and no money can be compared with a medal of the world championship or the Olympics. Money is there today, tomorrow is not, but gold medals are history.