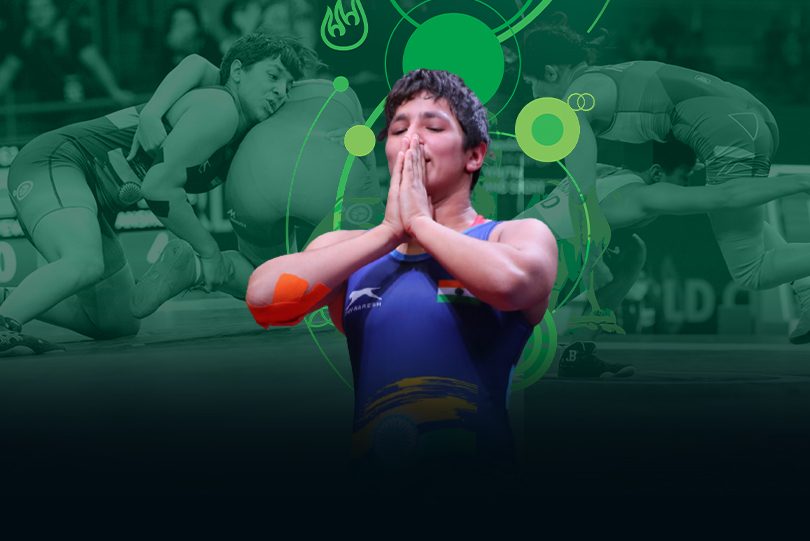 Wrestling News: Anshu Malik was the talk of the town after she won a silver medal in 57kg at the Individual World Cup — her third in her third senior-level competition —  in Belgrade, Serbia. The 19-year-old was the only Indian wrestler to finish at the podium. However, she had mixed emotions about her commendable achievement. She was happy of winning the medal but also felt sad at the same time as India could not achieve a desired performance.

“I am happy with my performance. I had gone to the tournament with a free mind and it worked for me. But I was also sad that we did not win more medals,” she said.

Anshu blamed the lack of training for India’s undesired show at the world cup. “India deserved at least three to four medals more but missed out. Our wrestlers lost in close bouts which is very saddening,” the Asian Championship bronze medallist said.

Nonetheless, her father rejoiced at his daughter’s podium finish. A former wrestler himself, Dharamveer Malik could not hold back his tears on Anshu’s hugely significant accomplishment.

Back in the 1990s, Dharamveer was a regular at the junior level. His biggest achievement of the career was the Cadet World Championship of 1995, where he failed to bag a medal. However, a knee-injury five years later ended his promising career. But he has now lived that dream through his daughter. “My daughter has fulfilled my desire of winning an international medal,” an emotional Dharamveer said.

“I had to quit wrestling because of the knee injury and therefore failed to make a mark at the international level. My elder brother Pawan Kumar had won a gold at the SAFF Games, but Anshu has surpassed all out achievements. I am proud of her”.

However, Dharamveer had least expected her daughter to excel in wrestling,

Anshu as wrestler was least expected

Dharamveer, revealed that he did not expect much of Anshu. He believed that his daughter was inclined more towards academics than on wrestling. So, he rested his hopes on his son Shubham. Interestingly, as Anshu got older, she started developing a keen interest in the sport.

“She would spend a lot of time studying, so we came up with a plan to have shorter training sessions for her,” her coach Jagdish Sheoran said. “Wrestling is in her blood, and I could see that she was learning the moves pretty quickly.”

Anshu started to rise in ranks. She won her first medal in 2016 at the Cadet Asian Championship which was incidentally her debut competition. It was followed by a world championship bronze medal in the same year. In four years, she has won two golds, three silver and five bronze medals. To put her achievement into perspective, barring the two competitions, she has won medals all the tournaments.

The youngster has now shifted her focus to the National Championship and the Olympic Qualifiers. Wrestling Federation of India (WFI) announced the dates for the women national championship. The tournament will be held in Agra on January 30 and 31. Anshu says that she will be preparing for it at home for now but if WFI holds a national camp, she is ready to join it. “I am looking forward for both Nationals and Olympic Qualifiers now. I will train at home for now but if WFI decides to hold a camp I will join it. It will help me prepare for the Qualifiers better”.