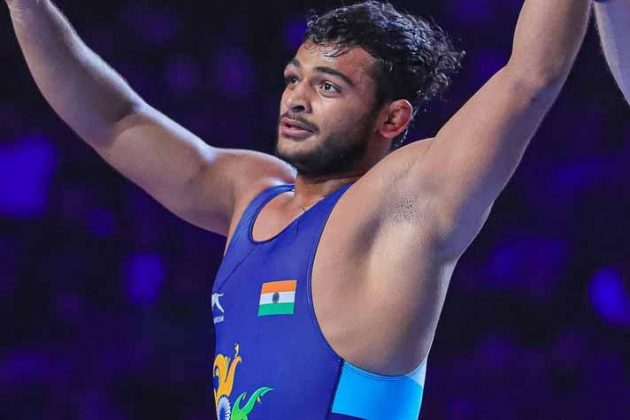 Asian Wrestling Championships -Deepak Punia eyes to retain Asian title, Ravinder to compete for bronze, Watch Live on WrestlingTV: Deepak Punia suffered a terrible defeat in the final of the 86kg category in Asian Wrestling Championship in Almaty, Kazakhstan. The match lasted only around three minutes as Yazdanichara of Iran completely dominated the bout from the beginning and reached the score of 10-0 close to halftime, to force the end of the match.

Earlier, Deepak Punia too suffered a defeat by technical knockout in the bronze medal match as he lost 14-4 to Khadzhimurod of Kyrgyzstan.

Deepak had reached the final of the ongoing Asian Wrestling Championship with a confident 2-0 win over Korea’s Gwanuk Kim.

Showing tremendous skills in defence, Olympic-bound Deepak Punia earned himself a shot at a maiden Asian Championship title by reaching the 86kg final, while Ravinder (61kg) and Sanjeet (92kg) will fight for bronze here on Sunday.

The Indian, who secured his Olympic quota with a World Championship bronze, earned both his points on the passivity of his opponent.

In the 61kg, disappointment was in store for Ravinder as he lost the bronze medal match to Khadzhimurod of Kyrgyzstan 14-4. It was a one-sided contest as the Kyrgyz wrestler dominated the proceedings and built up a huge lead before Ravinder tried to fight back and scored two quick points in the last minute. But the lead was too big and Khadzhimurod sealed the match by earning a 10-point lead and forcing the referee to end the contest.

Ravinder began with a close 4-3 win over Iran’s Majid Almas Dastan but lost his 4-7 semifinal defeat against Kazakhstan’s Adlan Aakarov.

The home wrestler’s relentless attack resulted in him getting out of breath in the second period but Ravinder could not take advantage of that.

Earlier, Ravi Dahiya made India proud by bagging the gold medal in the 57kg weight category of the ongoing Asian Wrestling Championship by defeating his opponent Sarlak A of Iran and defending his title. However, in the 65kg category, Bajrang Punia conceded the final to Japan’s Takuto Otoguro through a walkover.

The reason for Bajrang not competing in the final is, apparently, an injury. However, this news has been put out by ANI and is yet to be confirmed through an official communication.

Bajrang had earlier continued his stellar form after becoming World No 1 in the ranking series last month to advance the finals of the 65kg at the ongoing Asian Wrestling Championship in Almaty Kazakhstan.

Bajrang faced his arch-nemesis Takuto Otoguro of Japan in the gold medal bout. The 2018 CWG gold winner got the better of Korean grappler Yongseok Jeong 3-0 in the quarterfinals before outclassing Sarmandakh Bilguun from Mongolia convincingly by 7-0 to assure his finals berth.