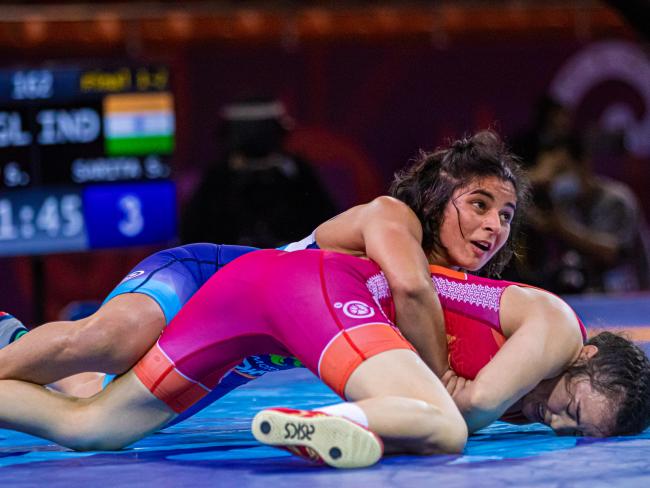 Asian Wrestling Championships: Sarita became the first Indian woman in history to win a second Asian gold medal when she defeated an opponent who had beaten her earlier in the day.

And she did it after coming back from a five-point hole.

Sarita defended her 59kg crown by rallying to a 10-7 victory in the final Thursday night over two-time world bronze medalist Shoovdor BAATARJAV (MGL) on the third day of the six-day Asian Championships in Almaty.

“I had won the gold medal in 59 in Delhi and I am the first Indian to defend my title,” said Sarita, who turns 26 on Friday. “Last year as well, I had beaten a Mongolian wrestler and now also I did the same. To get my country’s flag on the top in a foreign country is the proudest moment.”

Moves Of Day 3 at The Asian Championships #wrestlealmaty

Which action do you prefer?

With the women’s tournament at the spectator-less Baluan Sholak Palace of Culture and Sports missing powerhouses Japan and China, limited entries means all weight classes are conducted in round-robin formats.

Sarita and Baatarjav were drawn in the same group, with the Mongolian winning their first encounter 5-4 before they set up the rematch in the final with one-sided wins in the semifinals.

Sarita was familiar with Baatarjav even before the afternoon match. The Mongolian had beaten her 10-0 in the quarterfinals at the 2018 World Championships en route to the first of consecutive bronze medals.

“I had that in mind, but I also wanted to win the gold medal for myself and India,” Sarita said.

In the final, Sarita scored with a stepout before Baatarjav replied with a double-leg takedown for a 2-0 lead. Early in the second period, Baatarjav launched a hip throw at the edge that was awarded 2 points and was challenged by the Indian side — only to have the points revised to 4, with a lost-challenge point added, to give the Mongolian a 7-2 lead.