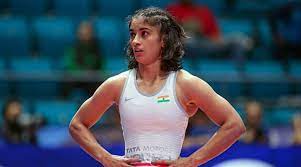 April 16, 2021 0Comments 156Views 0Likes
Asian Wrestling Championships – Vinesh Phogat, Anshu Malik to fight for Gold: With no Chinese, no Japanese, no North Koreans in fray – Indian wrestling queen Vinesh Phogat is targeting nothing less than Gold at the ongoing Asian Wrestling Championships. In 53kg category where Phogat competes only 5 other wrestlers are competing and Vinesh should not face any problem in getting better of them. Same is the case with other Indians in fray. Anshu Malik who recently booked her quota place for Tokyo Olympics has 6 others in fray.
Other than Vinesh, Anshu – Sakshi Malik in 65kg & Divya Kakran in 72kg will be seen in action on Friday. Watch the Asian Wrestling Championship action LIVE on WrestlingTV.in

Earlier on Thursday, Sarita More (IND) became the first Indian woman in history to win a second Asian gold medal when she defeated an opponent who had beaten her earlier in the day.

And she did it after coming back from a five-point hole.

Sarita defended her 59kg crown by rallying to a 10-7 victory in the final Thursday night over two-time world bronze medalist Shoovdor BAATARJAV (MGL) on the third day of the six-day Asian Championships in Almaty.

“I had won the gold medal in 59 in Delhi and I am the first Indian to defend my title,” said Sarita, who turns 26 on Friday. “Last year as well, I had beaten a Mongolian wrestler and now also I did the same. To get my country’s flag on the top in a foreign country is the proudest moment.”

With the women’s tournament at the spectator-less Baluan Sholak Palace of Culture and Sports missing powerhouses Japan and China, limited entries means all weight classes are conducted in round-robin formats.

Sarita and Baatarjav were drawn in the same group, with the Mongolian winning their first encounter 5-4 before they set up the rematch in the final with one-sided wins in the semifinals.

Sarita was familiar with Baatarjav even before the afternoon match. The Mongolian had beaten her 10-0 in the quarterfinals at the 2018 World Championships en route to the first of consecutive bronze medals.

“I had that in mind, but I also wanted to win the gold medal for myself and India,” Sarita said.

In the final, Sarita scored with a stepout before Baatarjav replied with a double-leg takedown for a 2-0 lead. Early in the second period, Baatarjav launched a hip throw at the edge that was awarded 2 points and was challenged by the Indian side — only to have the points revised to 4, with a lost-challenge point added, to give the Mongolian a 7-2 lead.

“When she scored a 4-pointer, I thought that’s big,” Sarita said. “I don’t think it was 4. But it was okay, and I thought I have to cover that if I want to win.