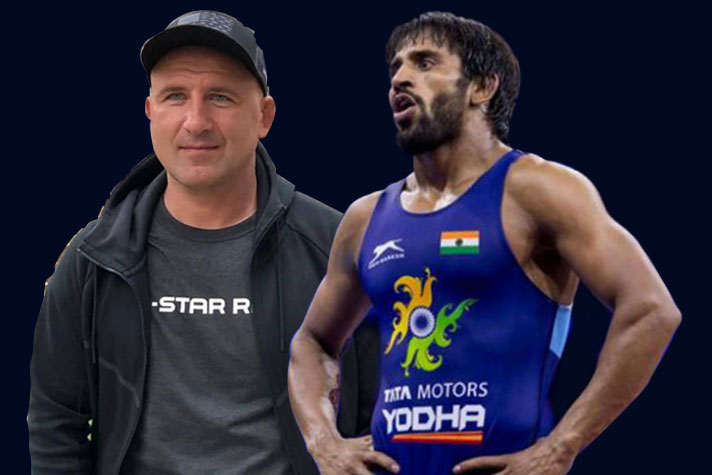 India’s best bet for a wrestling medal at the Tokyo 2020 Olympic Games,  Bajrang Punia has parted ways with his Georgian coach Shako Bentinidis. WFI has zeroed in on two replacements. WrestlingTV has reliably learnt that a Russian and a Cuban Olympic champions are in contention to train Bajrang in his pursuit for an Olympic gold next year.

Wrestling Federation of India was extremely disappointed with Bentinidis after Bajrang had to settle for a bronze at the UWW World Wrestling Championship in Nur-Sultan, Kazakhstan, last month for the coach’s wrong calls. The Georgian was also questioned by the WFI  for his failure to deliver even as Bajrang managed to earn a Tokyo 2020 berth.

The crucial call is made at a time when Bajrang’s preparations for the Tokyo 2020 Olympics are set to enter the most crucial phase as the federation and the wrestler were left with little hope to resolve the issues with the coach.

Bajrang, talking to the WrestlingTV, on Monday had declined to comment on the matter, only saying that “the picture will be clear in the next few days. It is inappropriate to speak anything at this stage. I have full faith in the Wrestling Federation. We will take the best decision in the interest of the country.” He had also declined to confirm or deny whether Bentinidis was in the life of fire.

Shako’s disappointing show at the Nur-Sultan World Championship was the last nail in the coffin. The WFI was also not happy about Shako making unwarranted comments about the federation.

The federation and the wrestler have zeroed in on Cuba’s Yandro Miguel Quintana, the 2004 Athens Olympics 60kg champion, and Russia’s Soslan Ramonov, the Rio Olympics 65kg freestyle gold medallist. A final decision will be made shortly. It is learnt that Punia is keen to go for the Russian. However, a final call will be made by the WFI.

Bentinidis’ wrong call to challenge the judge’s decision in Nur-Sultan had cost Bajrang dear as he eventually cost Bajrang dear as the Indian lost the semi-final bout to Daulet Niyazbekov. The Kazakh was declared the winner on tie-breaker rules after the bout had ended at 9-9. Bentinidis had also embarrassed the WFI for his unwarranted behaviour and short temper at the Nur-Sultan World Championships. He had also not been able to resolve the issue with Bajrang’s leg defence which often see the Indian ace losing crucial points in the beginning of his bouts.

Bajrang had to be eventually content with the bronze won in the repechage round.

Since, the coach had also started interfering in Bajrang’s personal life the wrestler eventually fell apart with the coach.

The coach was also accused of taking money to clear the then World No. 1 Bajrang’s appearances in exhibition and other preparatory events.