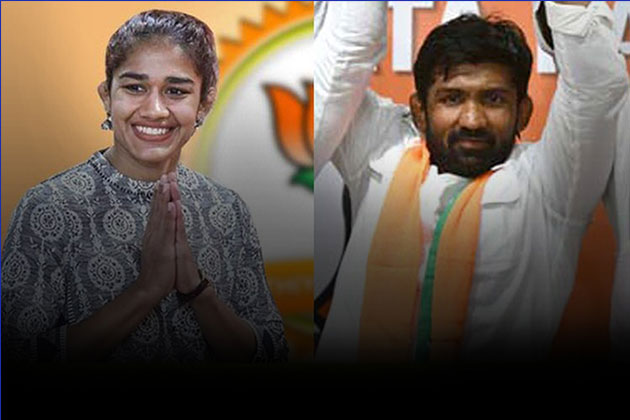 With Haryana going to elections today, the champion Indian wrestlers Yogeshwar Dutt & Babita Phoghat are ready for the biggest Dangal of their lives, albeit the political dangal.  Fielded by the ruling Bharatiya Janata Party (BJP), the two face a tough task ahead — wresting the two most difficult seats.

Baroda and Charkhi Dadri are two seats which not only BJP has never won but also had little presence in the past. While London Olympic bronze medal winner Yogeshwar Dutt is contesting from Baroda, Commonwealth champion Babita Phogat is trying her luck from Charkhi Dadri.

Both of them have made sports the centrepiece of their campaign.

Dutt has promised sports clubs and academies across the state during his campaign. “I am running a wrestling (Kushti) academy. The enthusiasm for sports is very high among both boys and girls. My academy alone has 150 players. Similarly, we need academies for other sports like kabaddi, hockey,” he said at one of the rally.

The Padma Shri awardee was introduced as the “sure shot” minister at most of the jan sabhas he addressed during campaigning.

The BJP has never won the Baroda seat, which has been represented either by the Congress or the Indian National Lok Dal (INLD) in the past. In the 2014 assembly elections, when BJP gave a stellar performance, Congress candidate Sri Kishen won the seat, while the BJP candidate finished third and even lost his security deposit.

What, however, gives Dutt an edge is that the popular sportsperson has managed to build a strong personal rapport with the electorate, keeping his campaign down-to-earth and humble. “Baroda is my area. I belong from here. Before me, all candidates were outsiders and did nothing for my people,”

In contrast to Dutt, Babita Phogat went for a strong and robust style of campaigning. She is projecting the image of a confident and bold woman who has through sports managed to break the shackles of a feudal, male-dominated society.

“Beti bachao, beti padhao, beti khilao” is her slogan, adding her own touch to the Government of India’s scheme started from Haryana in 2014. “I want more and more girls to get into sports. That is the way to empowerment. I am the daughter of Haryana and I am requesting every elderly person, man or woman to bless me,” she said in an interview.

But whether she will get the blessings of this Jat-dominated constituency, is still uncertain. Caste factors have always played a major role on this seat, and power has remained either with Phogat Jats or Sangwan Jats of the Congress or the INLD.

Somveer Sangwan, the BJP candidate who contested this seat in 2014, lost to INLD’s Rajdeep Phogat by barely 1,600 votes. This time, Somveer is in the fray as an independent candidate. Ex-serviceman Nripendera Sangwan is Congress’ choice. Phogat’s speeches have been short and sharp and she has made sure to invoke Prime Minister Narendra Modi and Chief Minister Manohar Lal Khattar every time. “The BJP has entrusted me with this responsibility and I intend to live up to it,” she told the crowd at one of the rallies.

It will be interesting to see, if the champions on mat will be able to put up a show in this dangal of politics.