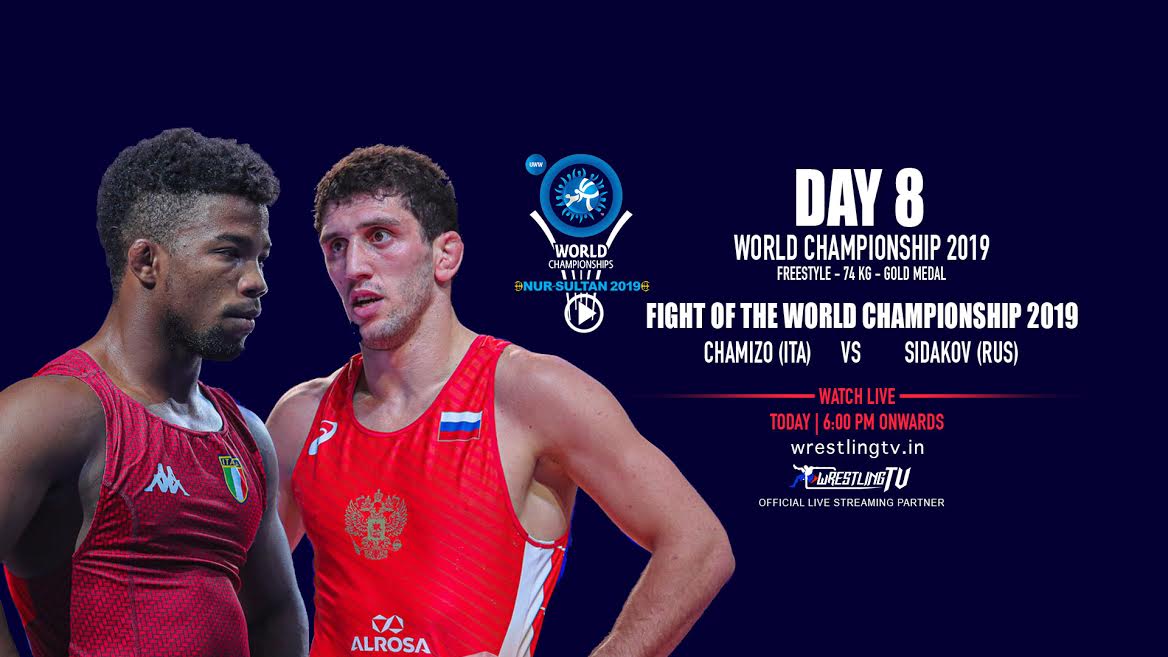 One is the current world number 1 & another one is reigning world champion and at stake is the world wrestling championship Gold Medal in 74 kg category. Wrestling match up cant get bigger than this.

It is showtime between current world number 1 Frank Chamizo of Italy & reigning world champion Zaurbek Sidakov of Russia live today on WrestlingTV.in @ 6 PM. Without any doubt this is the fight of world wrestling championship 2019.

For Sudanov it is Deja vu all over again as he stopped Burroughs for 2nd year in row.
The defending champion Russian scored with one tick left on the clock for the second year in a row to end a bid by Jordan BURROUGHS of USA for a fifth world title at 74kg

This year, Sidakov’s late point for a stepout came one round later than in Budepest, giving him a 4-3 victory in the semifinals. With this he got the right to challenge the two-time world champion Frank CHAMIZO in the final on Saturday evening @ 6PM live on wrestlingtv.in, the wrestling destination for all wrestling fans.

“The one thing that helps me during the match is I really believe and hope that I will win,” Sidakov said. “I know Jordan Burroughs very well and respect him. But I can say my desire to win was even stronger than last year.”

Sidakov went ahead 2-1 with a takedown in the second period, only to see Burroughs, who pulled off two come-from-behind victories in the qualification rounds, go ahead with a go-behind takedown with :45 left.

As he did in Budapest, Sidakov desperately went on the attack, shooting for a double-leg tackle that Burroughs countered with a sprawl as he was pushed toward the edge. The two tumbled out of bounds together, and Sidakov was awarded a stepout point to clinch the win on criteria. An unsuccessful challenge accounted for the final score.

“This year, I prepared better,” Sidanov said. “There were 12 training camps before this championships, and I trained for seven straight months. Last year, I didn’t have a world title, so I just went out onto the mat and wrestled.”

Earlier the glamour man of wrestling, Chamizo, defeated Zelimkhan KHADIEV of France  4-1 in the other semifinal. Chamizo will vie for his third world title.

Sidanov commented: “When me meet on the mat, it doesn’t matter who is older or younger or who has more titles. Opponents compete win me different than last year. The other wrestlers use all their power against me.”