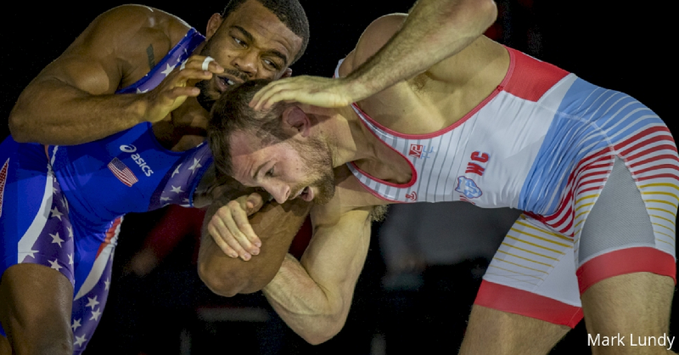 Clash of Champions in Wrestling – Jordan Burroughs vs David Taylor: It was interesting to witness the level at which 2012 Olympic Champion Jordan Burroughs could push himself. But he did so where he almost defeated the World No.1 David Taylor who is above his weight category but ended up losing 4-4 on criteria.

Burroughs, the king at 74kg, decided to move up to challenge himself, when he took on the No.2 American at 86kg Zahid Valencia and emerged with an 8-5 victory. Riding on the back of the impressive win, he then decided to challenge Taylor

It led to some banter between the duo in the build-up to this match materialising. Burroughs and Taylor had wrestled four times before, but those matches were down at 74kg.

However at 86kg, Taylor is much bigger and much better than he was in 2014 when they last met, and he showed it on Wednesday night in Burroughs’ backyard.

You just don’t get any closer than that. David Taylor holds on in the last moments against Jordan Burroughs and gets the 4-4 criteria win.

Taking part in FloWrestling’s main event in Lincoln, Nebraska, Burroughs and Taylor started things off with a lot of aggression. After some heavy hand fighting, the World No.1 moved on the offensive, first securing a front headlock, but Burroughs was able to fend off the 2018 world champion.

Then Taylor fired off the best attack of the first period when he snagged a single-leg on Burroughs. but the 2012 Olympic Champion fended off the attack with a shallow shin Whizzer (a defensive technique that fights off lower leg attacks).

Shortly after that flurry by Taylor, Burroughs was called for passivity and put on the 30-second shot clock, and with Burroughs not scoring before the 30 seconds expired Taylor secured a point. He took the 1-0 lead into the break.

He continued attacking in the second period and got in on another single-leg. But this time, he was able to elevate the leg, but Burroughs smartly moved towards the edge of the mat, giving up a single point for the step-out rather than giving up a two-point takedown.

With two minutes left, Burroughs shot in and the two looked to have collided heads, but Taylor secured a go-behind for a takedown to go up 4-0.

With under a minute remaining, Burroughs switched on to his famous “sprint” where he puts the pedal down in an all-out assault when trailing late in a match.

Burroughs secured a step-out on Taylor, winning the first point of the game. With just 25 seconds left, he was in on a single-leg by Taylor did not give up the takedown but conceded the push-out. With 12 seconds remaining, another push-out by Burroughs to cut the lead to one.

In the final five seconds, Burroughs tied the match with another push-out. But Taylor had the tiebreaker with two-point move earlier in the second period.