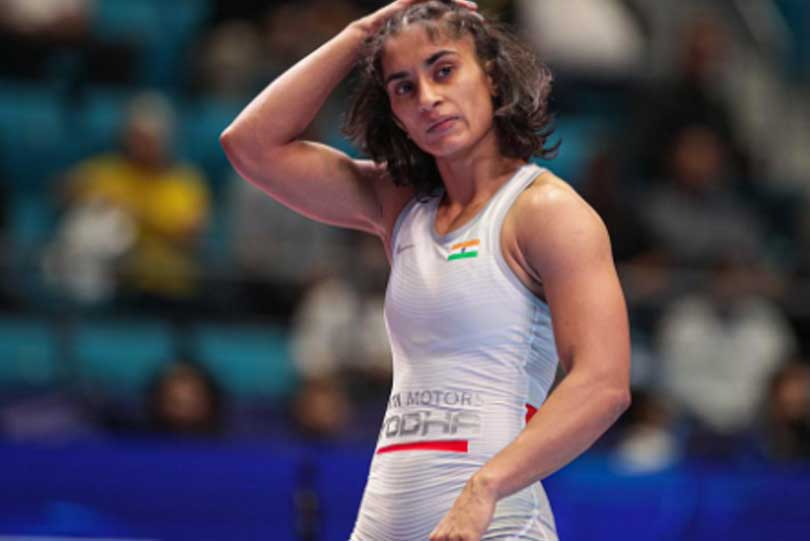 March 21, 2020 0Comments 644Views 0Likes
With competitions cancelled, training camps suspended, coaching staff missing and above all threat of Coronavirus looming everywhere, it is enough to break anyone’s spirit. But not if the name is Vinesh Phogat.
Despite of all the odds against her, the queen of Indian wrestling Vinesh is not ready to give up on her Tokyo 2020 dreams. Vinesh and her coach Woller Akos had returned from Norway early after the Sports Authority of India (SAI) cut short their training camp as a precautionary measure against COVID-19. But with the situation getting serious with each passing day, her Hungarian coach decided to return home to be with him, family.
Also Read: Vinesh Phogat Exclusive Interview : I am not thinking about postponement, completely focussed on Tokyo 2020 Olympics
Indian ace women wrestler Vinesh Phogat has also self-isolated her and now trains with her sister only but without a coach. She has been training at an akhara near her home. The 25-year-old Haryana wrestler trains twice a day with her trusted sparring partner Priyanka.
“Yes, he has returned to Hungary. I am now training solo. I do weight training and cardio. For mat training, I only train with my sister Priyanka,” she told WrestlingTV.
But training without a coach is not a piece of cake. The duo, however, has found a solution to the problem.  They now communicate over the phone where Akos instructs her about the daily schedule. At the end of the day’s practice, the 25-year-old then gives a complete report of her training to the Hungarian coach.
“Yes, of course, it is difficult with him not being around. When he is around, he can tell me about my shortcomings during practice instantly. Now, it is different. But we have found the solution” said Asian Games 2018 gold medallist Indian.
“He now sends me a weekly training schedule. Each day before training we discuss the plan. Later, at the end of the day, I give him a full report of my practice and we discuss how to work on my shortcomings,” she added.
Vinesh who has already qualified for the Tokyo Games, thanks to her 2019 World Championships performance will compete in the 53kg weight class. Her top competitors at the Olympics would be USA’s Jacarra Winchester, Korea’s Mi Pak Yong and Japan’s Mayu Mukaida.
But the Indian wrestler believes that she is ready for any challenge at Tokyo. “My training is going well and I am ready for the Olympics,” she sighed off.
Wrestling (Kushti) fans can catch Live Streaming, Highlights, News, Videos, Photos, Results and Rankings on WrestlingTV