Foes on mat, friends off it: Gaurav Baliyan, Jitender’s story of friendship and rivalry for 74kg Tokyo Olympics spot 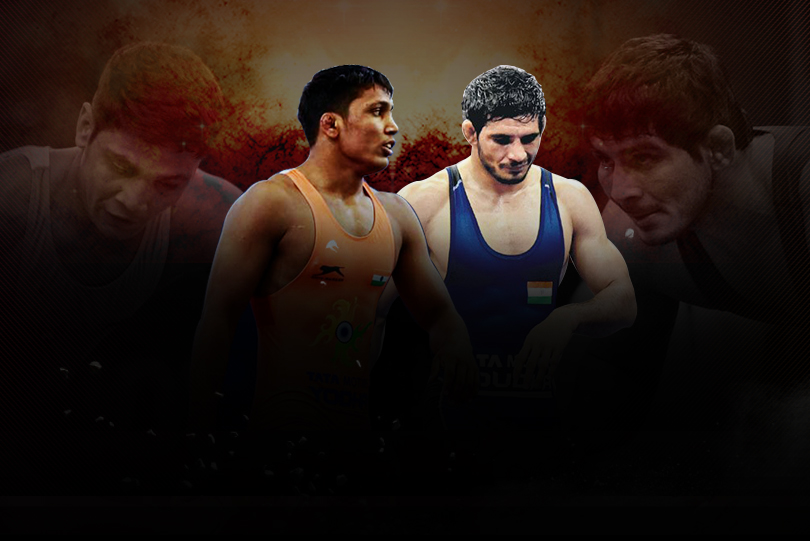 Gaurav Baliyan is a happy lad. The boy from India’s most populated state Uttar Pradesh has once again started chasing his Olympic dream. The only hurdle between him and his ambition is the 74kg national trials for Tokyo Games-bound Indian team. But with a little help from world medallist, Bajrang Punia and sparring with his rival Jitender 18-year-old wrestler might just pull it off. “It is good to have them around. Bajrang is a great help on the mat. As for Jitender, he treats me like his younger brother off the mat but when on it, he means business,” Gaurav says humorously.

Not so long ago, Gaurav was amongst the medal winners at the Asian Championships. And two months before that, the young blood had edged his senior counter-part Parveen Rana 5-3 to become the national champion in the 74kg weight category. But all of his hard work and good form went down the tube when the covid-19 triggered lockdown was imposed in India. Gaurav spent his time training individually in a local akhada in Muzzafarnagar with minimal equipment. “During the lockdown, I could not do much. It was me, some weights and the local akhada. I trained individually for the past three months thinking only of the Tokyo Olympics”.

He has now moved to Inspire Institute of Sports (IIS) in Vijaynagar, Karnataka where he has joined Bajrang, Jitender and Pooja Dhanda for training. “I came here in the second week of July. As per the protocol, I was in quarantine for 14 days after which they allowed me to resume training,” the elated Asian Championships silver medallist said. “The weather is good here, better than what we have in Uttar Pradesh. So, it is easy to train. Also, with the facilities here, training sessions are good,” he added.

Brother from another mother

Jitender and Gaurav are amongst the top contenders for the spot in the Tokyo Olympics-bound Indian team in the 74kg weight category. Before the worldwide lockdown was imposed due to covid-19, Jitender was the No.1 pick to represent India at the Olympic Qualifiers. It meant, Gaurav had to wait for another four years before realising his Olympic dream. But the postponement of the event along with Tokyo Olympics to 2021 opened new doors for the 18-year-old wrestler.

He is happy to spar with his senior counter-part and believes it will prove beneficial during the real match. “He is a good wrestler. Practising with him is beneficial for me as I will learn new techniques from him,” Gaurav said. “Off the mat, we talk about our shortcomings. He would also talk about other things apart from wrestling which is refreshing given the current conditions”.

Apart from Jitender, the young wrestler will be up against the likes of twin Olympic medallist Sushil Kumar, 2015 world medallist Narsingh Yadav and two-time Asian Championship medallist Parveen Rana. Wrestling Federation of India (WFI) is likely to hold fresh trials next year. The announcement has given a new lease of life to many wrestlers who aspire of competing at the Olympic Games.

On his chances of winning at the national trials, Gaurav added, “Everybody is a champion outside the mat, however, matches are not decided like that. Once we step on the mat is when we truly prove our mettle”.

74kg is probably India’s most fierce weight category and to overcome the champion wrestlers it boasts, Gaurav would need all the help he can get. And this time, it is the three-time world medallist and India’s best medal bet at the quadrennial event, Bajrang Punia. The 26-year-old wrestler is helping Gaurav in many ways. “He helps me a lot. During training, when I make mistakes in my moves, he would point it out to me. He is also helping me learn new techniques. Besides this, he would also help me stay positive. He is a true inspiration,” Gaurav said.

With world championships approaching, it is an opportunity for the youngster to test his skills before challenging Jitender and others for the top spot. Gaurav has made a rough sketch of his plans for the worlds which will be held in Belgrade, Serbia in December. However, with the help of coaches and seniors, he will give the final touch to his portrait. “I had got the news of the worlds after arriving here (Vijaynagar). Now that I know it, I have roughly made plans in my mind. But will discuss with the coaches and make a proper plan for it,” he sighed off.