From becoming a music teacher to taking up wrestling: Taha Akgul narrates his journey to Olympic gold 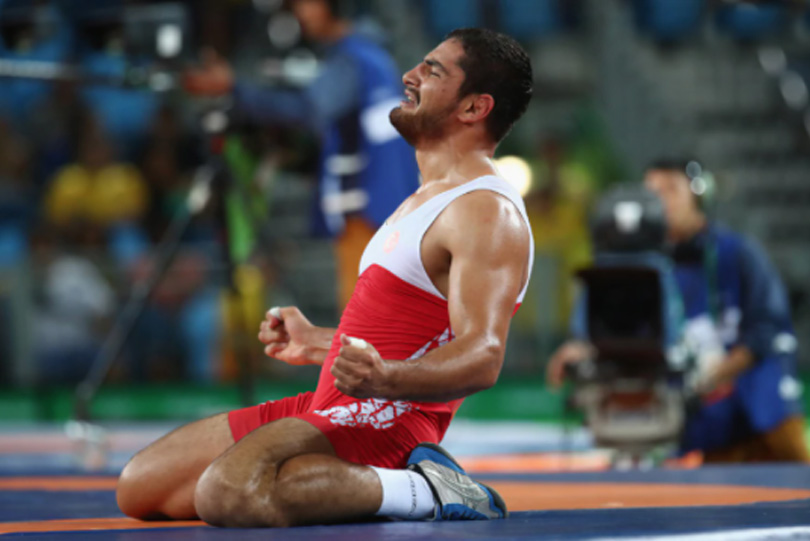 Turkey’s Taha Akgul is regarded as the best active wrestler alongside Russia’s Abdulrashid Saduleav. The 29-year-old has won five world championship medal including two gold and silver medals and one bronze. Besides this, he is also the 2016 Rio Olympic champ in the heavyweight 125kg freestyle. But little does anyone know that there was a time when the champion wrestler had hanged his singlet to pursue an alternative career.

Chapter 1: Introduction to wrestling
Akgul was introduced to the sport at the age of 12 by his father who was also a wrestler. Until then, he was involved in many other sports too. The wrestler says “I wrestled with all my attention and under the guidance of my father. My father and brother were both wrestlers and always helped to excel especially the latter whose wrestling performances were a great motivation for me on the mat,” adding that he realised his wrestling talent after winning at the Wrestling Training Center. But initial failures in the career forced Akgul to look for other career options and focus on education.

Also Read: Wrestling News: First wrestling match on Monday since Coronavirus lockdown; Check how to watch the it

Chapter 2: Quest to become a music teacher and then back to mat

During his first stint on the mat, Akgul says that he had learned the basics of wrestling. But since he was not able to get much success he decided to leave the sport and focus on education. He left training and started preparing for his university exams. “After my university exams, I decided to become a Turkish teacher. While I was in university in Izmir, I did not wrestle for two or three more years and just focused on education. But one day I discovered a wrestling club in Izmir. And then a voice from inside told me that I should try again,” the Olympic champ told Turkish news daily.

“I went to practice, earned medals towards the end of the year, and when I realized that I was using my talent in concrete terms, I left everything and focused on wrestling. And I have been in this sport ever since. I was going to be a Turkish teacher and now I am a wrestler. When I look back now I say, “Well, that is how it happened,” he chuckles.

Chapter 3: Shoulder injury and missing out on 2020 European championship

The last major tournament Akgul played was the 2019 World Championship where he lost to Georgia’s Geno Petriashvili. Since then, he has been out of the competition due to a shoulder injury which he suffered in December. The Turkish wrestler missed out on the 2020 European Championship and could have had a bad Olympic campaign had it been held this year. I can say that I am better now. The coronavirus outbreak gave me time to recover and make a comeback. I’m doing a few exercises. I’m trying to strengthen my shoulder. I think I will get my old form as soon as possible,” he said.

“Frankly, I can say that the decision to postpone has come as a silver lining to my Olympic medal quest. Had it been held this year, I wouldn’t be ready. But now I have a little more than 12 months ahead of me. I train in my little gym in my home and in the main gym slowly. I will return to the mat much more strongly,” he added.

Akgul has set his sight for the second Olympic podium finish when the games reach Tokyo next year. His main competition in the heavyweight category is Petriashvili. The duo has met on three occasions out of which Akgul has only managed to beat his Georgian counterpart once at the 2018 Worlds. So it would be the battle to become the strongest freestyle wrestler at Tokyo Olympics between both the athletes.

Moreover, the Turkish legend is 29 and will turn 30 by the time the Olympics reach Tokyo. And there might be a chance he might hang his singlet after the Tokyo Games. Talking about his post-retirement plans he says,”After retiring from wrestling, I want to continue to stay in the sport. I can even continue without a break. I do not know what, where and what when I am on duty, but I know that I will continue to serve sports. Because I come from the kitchen of this business and I want to do my best to help my brothers who love this sport in infrastructures,” the two-time world champion concluded.