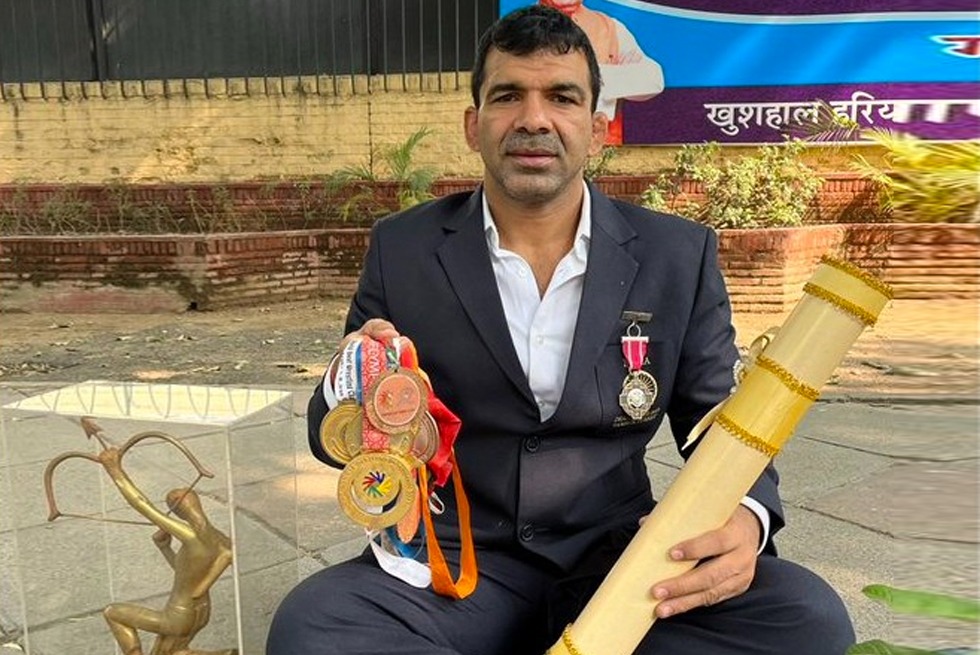 Wrestler Virender Singh Yadav, who is among the Padma Shri awardees this year, has called on Haryana Chief Minister Manohar Lal Khattar to recognise the state’s deaf sportspersons like him as para-athletes.

Singh, who was born in Sasroli near Jhajjar in Haryana, cannot speak or hear. On Wednesday, he posted a picture of himself sitting on the footpath outside the Haryana Bhawan here with his Padma Shri, Arjuna Award and other international medals.

“Honourable Chief Minister ML Khattar, I am sitting on the footpath of your residence Delhi Haryana Bhawan and I will not move from here till you don’t give equal rights to deaf players like the para athletes. When the Centre gives us equal rights, then why not you?” Singh tweeted.

There are no Paralympic categories for athletes who are only deaf and the International Committee of Sports for the Deaf (ICSD) is the body which conducts sports events specifically for them.

The Deaflympics is recognised by the International Paralympic Committee but deaf athletes are not a part of the more celebrated Paralympic Games.

Singh received the Padma Shri from President Ram Nath Kovind at a ceremony at the Rashtrapati Bhavan on Tuesday, a photo of which was tweeted by Khattar, congratulating the celebrated grappler who inspired an acclaimed documentary on his life called ‘Goonga Pehelwan’.

“It is a matter of pride for all the people of the state that the son of Haryana and para wrestler of freestyle wrestling, Mr. Virender Singh ji has been honoured with the ‘Padma Shri’ award. Hearty

congratulations and best wishes to him for this award,” Khattar had tweeted.

To this, Singh, who has won three gold and a bronze medal in the Deaflympics while competing in the 74 kg weight division, reiterated that he wants same rights on prize money and accolades as para athletes, adding that he has also spoken to Prime Minister Narendra Modi regarding the same.

“Chief Minister, if you consider me as a para athlete, then why don’t you give be the rights that come with the para title.

“For the past four years, I have been running from pillar to post. I am a junior coach even today and have not received any cash award. Yesterday I spoke about this with PM Modi, now the decision is in your hand,” he wrote on his twitter page.