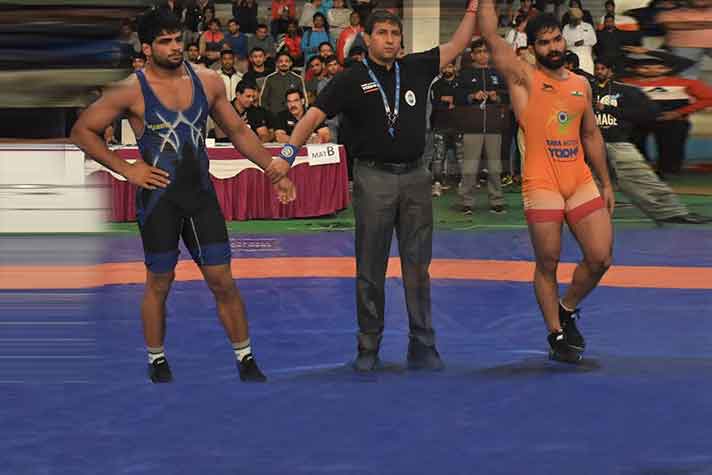 New Delhi, December 1: Asian Championships silver medallists Gurpreet Singh and Sunil Kumar lived up to their reputation as both clinched gold medals on the final day of the Tata Motors Senior National Wrestling Championships in Jalandhar on Sunday.

This was Gurpreet’s fourth Senior National title. The Punjab grappler defeated two-time World Junior Championships medallist Sajan Bhanwal, who was representing the Railways, by 3-1. Gurpreet continued his dominance over his younger rival and registered fourth win in the five matches played between them so far.

Sunil also managed an easy win over Punjab’s Prabhpal Singh. The Railway’s grappler used all his energy and experience to crush the Punjab wrestler by 5-1.

Also Read: Sakshi and Ravinder to lead Indian Team as WFI declares 14-member squad for the SAF Games in Nepal

In the 55kg category, Karnatka’s Arjun, representing Services, defeated Ajay by 9-0 to win gold. Enjoying the home support Punjab’s Harpreet Singh defeated Rajbir Chhikara of Railways with a 4-1 scoreline. The Asian Games silver medallist used his experience to dislodge his opponent’s confidence and won the title in the 82 kg category. Hardeep Singh, who was the first greco-roman wrestler to qualify for the Olympics, received a walkover against Ravi Rathi of Railways in 97 Kg.

Railways concluded day at the top spot with 210 points while Services are placed at second (170 points) followed by Jharkhand at third (109 points).

Meanwhile, the Indian contingent for the 2019 South Asian Games (SAG) was declared by the Wrestling Federation of India (WFI) as the gold medallists at the Tata Motors Senior Wrestling National Championships were inducted in the squad. The 7-member men’s and women’s contingent will be led by Olympic medallist, Sakshi Malik and U-23 World Championship silver medallist, Ravinder at the Championship which is starting from December 6-9 in Nepal. “The players have been chosen after an extremely competitive competition from the National platform and I am confident that the players will maintain the supremacy and defend their 2016 titles in both the men and women’s category at the South Asian Games,” said Brij Bhushan Saran Singh, the WFI President.