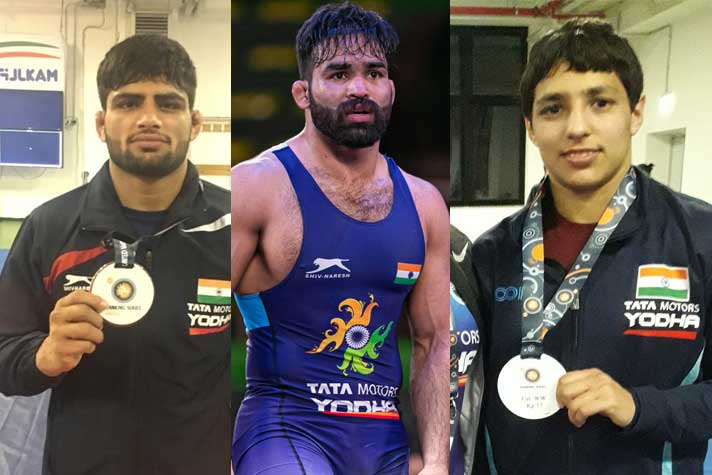 India’s Gurpreet Singh has created history by winning gold in the UWW Rome Ranking Series wrestling as he became first Indian to win Ranking Series level gold in Greco-Roman category. Gurpreet scored 8-5 victory over Burhan AKBUDAK of Turkey in the 82kg finals. It is worth noting that Gurpreet moved to 82kg non-olympic category at the very last minute of the competitions as his regular category in 77kg.

Earlier Gurpreet reached the final of the 82kg with a dominant show. He did not lose a point in the semifinal against American John Walter Stefanowicz, winning 5-0. Before that, he won by technical superiority in the high-scoring quarterfinal against Ukraine’s Dmytro Gardubei.

India had some more to cheer from the Greco-Roman wrestling front as Sajan Bhanwal won bronze medal for the country in the 77kg. Sajan defeated Emrah Kus of Turkey by fall to win bronze. This was India’s 3 medal in the Greco-Roman category as Sunil Kumar won Silver on the day 1 in the 87kg category of the competitions.

Anshu Malik settles with Silver
The magic of Anshu Malik of India finally ended in the gold medal bout of the 57kg in the Rome Ranking Series. Anshu could not match the moves of  Odunayo ADEKUOROYE of Nigeria to lose out the final bout tamely 10-0. The Indian could not match the reach and power moves of Odunayo and settled for Silver medal in her debut UWW ranking series event.
The 18 year old debutant in the Senior category has made it to the finals of 57kg category as she defeated Jenna Rose BURKERT of USA in mere 1 minute by superiority as she was up 10-0 against the American. Anshu had earlier stunned 2019 world champion Linda Morais in last 16 bout and also registered sensational victory against Grace Bullen of Norway in the last 3 seconds in Quarterfinals.
Earlier Anshu registered one of the biggest victory by the Indian wrestler on foreign soil.  The champion from India stunned 59KG world champion Linda Morais in the quarterfinals of the UWW Rome Ranking Series. Linda won gold at Nur-Sultan world championships in 59kg but has moved to 57kg in order to qualify for the Tokyo Olympics. 2019 Asian Junior Champion Anshu did not gave any chance to Linda and won the bout 8-3 by completely outshining her illustrious opponent. In the round 1, Anshu made a winning start in the 57kg as she defeated Maria Victoria Dilone of Spain 10-0. The Indian champ is making her debut in the senior category through this tournament.