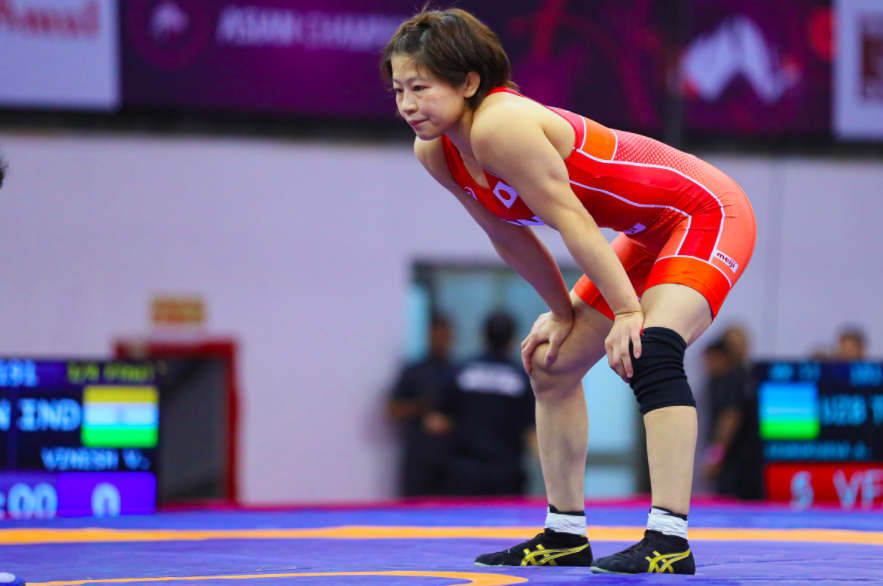 Had the global health crisis not disrupted her life and the sports calendar, Japanese wrestler Mayu Mukaida would have married her coach Shota Shidochi. But all the plans fell flat when the Olympics got postponed to 2021. Despite these most uncertain of times, the 23-year-old has now seized control of her situation, and has begun preparations for whatever comes next. “I want no regrets later, whether the Olympics go ahead or not. I will prepare the best I can,” Mukaida told Kyodo News in a recent interview.

In February, Mukaida and Shidochi moved their training base to Tokyo from Aichi Prefecture in central Japan to get used to the host city environment, but in March the Olympics were postponed until 2021.

After the initial disappointment of having to wait another year for her shot at Olympic glory as well as her wedding day, Mukaida finally came to terms with the reality of having to re-plan everything in August.

Born in Mie Prefecture, Mukaida started wrestling at the age of five and lived away from the familiarity of home from the time she was a junior high schooler when she joined the Japanese Olympic Committee Elite Academy’s program for promising young talents.

She traveled to the Rio de Janeiro Games in 2016 as the sparring partner of the legendary Saori Yoshida. Having developed solid skills against the most decorated female wrestler of all time, Mukaida was ready to step out of the shadows and into the spotlight.

“At the next Olympics I’m definitely competing,” she told herself in Brazil.

Four months after Yoshida had to settle for silver in the women’s 53-kg division in Rio, Mukaida was crowned champion in the non-Olympic 55kg division in her world championships debut.

Two weeks later she won the 53kg title at the national championships and was quickly hailed as the natural candidate to take over Yoshida’s mantle after she retired in 2019 with 13 world titles and three Olympic gold medals to her name.

Eager to step up, Mukaida, the 2017 world silver medalist at 53kg, earned her Olympic spot by placing second in the 53kg at the September 2019 world championships in Kazakhstan.

At February’s Asian Wrestling Championships in New Delhi, India, she blew an eight-point lead to Tatyana Akhmetova Amanzhol of Kazakhstan in the final, allowing her opponent to snatch the 53kg title.

Despite the outcome, Mukaida was happy with what she expected to be her final tune-up before the Tokyo Olympics, saying, “It’s been a while since my legs moved that way. All I’ve got to do is make minor adjustments.”

But when she returned to Japan, the coronavirus infection rate had soared worldwide. Her alma mater, Tokyo’s Abe Gakuin High School, shut down its training facility, and Mukaida was unable to get on the mat from late March to late June.

When things were most uncertain, her long-time coach and fiance Shidochi helped her through the difficult times she feared an Olympic cancellation.

“He gives the most unfettered advice,” she said.

As Mukaida adapted to new ways of training, Shidochi helped her remain strong. The couple ran together and went through drills and techniques by a river in their neighbourhood, focusing on conditioning.

“There were times she was zoned out and I’m sure she had a lot of mixed feelings. But she never skipped practice,” Shidochi said, adding that her transition back to the mat was smooth because she stayed active despite the coronavirus restrictions.

The Japan Wrestling Federation said it will not send athletes to next month’s World Championships in Serbia, meaning Mukaida misses a prime opportunity to sharpen her form.

Though she has two world titles at 55kg, Mukaida is less confident when she drops down to the 53kg, and given the difficulty with travel amid the pandemic, she does not know if she will get a chance to hone her skills against foreign wrestlers before next summer.

Describing a feeling of “bitterness” that she is still looking to go one better than second at a major international tournament, Mukaida says she has never been more motivated.

“I promise to make amends in Tokyo,” she said.

NOTE: The story was originally published on KyodoTimes