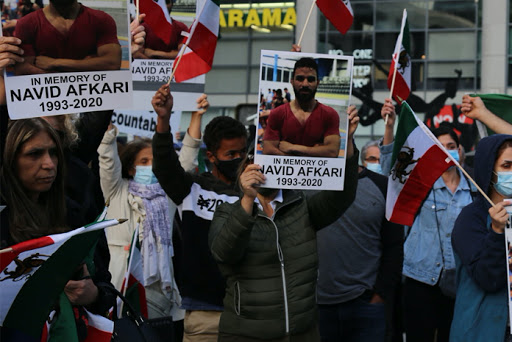 A new organization comprised of decorated Iranian athletes and human rights activists on Friday urged the International Olympics Committee and the International Federation of Association Football to suspend the Islamic of Republic of Iran from all sports competitions because of its reported murder of the champion wrestler Navid Afkari.

United For Navid posted videos on its website from Nobel Peace Prize winner Shirin Ebadi, former Iranian kickboxing champion Majid Fallah and former Iranian Greco-Roman national coach Sardar Pashaei, who all called for the ‘Islamic Republic to be suspended from international sports in response to the killing of wrestler Navid Afkari and Islamic Republic’s systemic discrimination against women, including female athletes who have faced numerous restrictions.”

Sardar Pashaei, the famous Greco-Roman Iranian wrestler, said in a nearly two-minute video on the website of United for Navid that “In Iran, Kurdish, Baloutch, Arab, Sunni, Bahai and even female athletes face systematic discrimination.”

He added that “I personally witnessed Iranian authorities forcing athletes to refuse to compete with Israeli athletes…Athletes that take part in civil disobedience protests in the streets are arrested, tortured and even executed, especially the innocent young athlete, Navid Afkari.”

Pashaei continued: “I ask where else is in the world is a young athlete arrested, tortured and hanged?”

He called on international sport bodies to suspend Iran’s regime “As long as Iran does not respect human rights and treat its citizens in a fair way.”

Iran’s regime executed the 27-year-old national champion Greco Roman wrestler Afkari on September 12 for his role in demonstrating against regime corruption in 2018.

The regime claimed Afkari killed an intelligence security officer during protests against the worsening economic situation. Human rights organizations and an eyewitness said Iran’s regime brutally tortured Afkari to confess to a crime he did not commit.

United for Afkari said that “What happened to Navid is typical of the brutal manner the regime deals with protests. More than 7,000 people were arrested only in the 2019 demonstrations. Amnesty International just published a detailed and painful report of torture and physical abuse of these demonstrators. The Islamic Republic of Iran violates the spirit of sports, abuses the nation’s athletes, and discriminates against its own people for ideological reasons.”

The statement from United for Afkari added that “Women are banned from attending sporting events. Last year, Sahar Khodayari, a young woman who faced a court trial for attending a match dressed up as a man, doused herself with gasoline and set herself on fire. Moreover, Iranian athletes are ordered to purposely lose in competitions to avoid facing their Israeli counterparts.“

According to the United for Afkari statement, “Such a ban by the Olympics Committee and other sporting bodies has a historical precedence. In 1964, the Olympics Committee banned South Africa from the Olympic games due to apartheid. FIFA also followed suit in subsequent years. Lack of action in the face of egregious human rights violations by the Islamic Republic would send a wrong message to Iranians. It would mean that Iranian lives do not matter.”