It’s official! Bajrang Punia-Sangeeta Phogat to get married on Nov 25 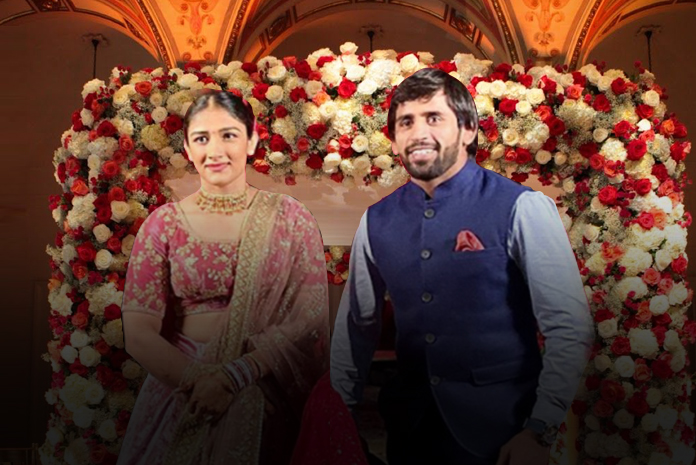 October 5, 2020 0Comments 515Views 2Likes
It is official! India’s star wrestler Bajrang Punia and Sangeeta Phogat will get married on November 25 this year. The soon to be a bride on why they chose to get married in winter said: “Mostly everyone in my family got married in winter. We are just waiting for the date to get fixed,” she said. The dates will be out in 10-15 days she added.

But how exactly this Love story started?

Sangeeta says her love story with Bajrang started only after moving to Sonepat. The 22-year-old grappler initially started her wrestling career just like her other sisters- training under her father Mahavir Phogat. But later she moved to Sonepat along with her sister Geeta and Babita to train. It is there the Bajrang and Sangeeta story started.

The two got engaged last year in a ‘Roka’ ceremony in Punia’s home in Sonepat and had earlier planned to get married after the Tokyo Olympics. But, with the games delayed due to the pandemic, they now plan to become life partners before it. Phogat is ready to wear masks on her wedding and abide by the government guidelines. “We have to follow the protocols. Otherwise, if both of us get sick, then we will have to call off the wedding,” she chuckles.

The wrestler plans to wear something similar to her elder sister Babita’s lehenga which was designed by the famed designer Sabyasachi Mukherjee. “It was very nice. I have zero fashion sense, so therefore I am taking help from Geeta,” she added.