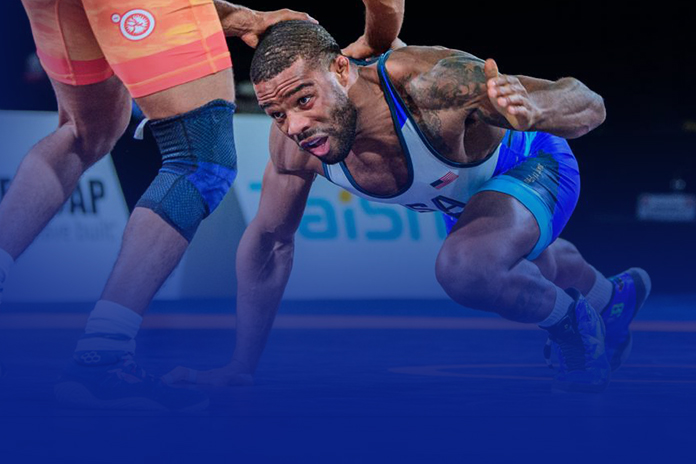 Jordan Burroughs made an exciting comeback against Zahid Valencia in the main event for FloWrestling’s Burroughs vs. Valencia card on Saturday night in Austin, Texas.

The two went head-to-head at a catchweight,185 pounds. Burroughs normally competes at 74 kg/163 pounds, while Valencia competes at 86 kg/189 pounds.

Valencia, a 2017 Junior World silver medalist and two-time NCAA champion for Arizona State, drew first blood in the match against five-time World and Olympic champion Jordan Burroughs, with a duck under for a takedown in the first minute. Shortly after, Valencia extended his lead with another takedown for a 4-0 advantage at the break.

In the second period, Burroughs began his comeback bid with an early go-behind for a takedown. Valencia tacked on a step out but that would be all the Sun Devil would score.

Burroughs, who also owns three World bronze medals, collected two takedowns and two step outs in the final 90 seconds to close it out with an 8-5 victory.

The night’s co-main event featured Evan Henderson and Anthony Echemendia, who both put on a show as it set up for a major main event.

Henderson, who was second at the 2020 Senior Nationals, took an early lead and was able to hold on for the win. With Henderson leading, 3-0, with a takedown and step out in the first period, the two had a crazy exchange near the edge, which ultimately resulted in exposure for Echemendia and a reversal for Henderson. Henderson’s corner challenged the call, but it failed, giving Echemendia another point, putting him within reach of the win. But with 28 seconds left, Henderson sealed the deal with a huge four-point takedown and the eventual 8-3 win.

Helping Miracle to the dominant win was a four-pointer on the edge early in the second period. Miracle also collected a pair of takedowns en route to the victory.

Ragan wrapped up the match in 2:35 with a 10-0 technical fall. To open scoring, Ragan won a crotch lift in a scramble early in the match. In the second half of the period, Ragan scored three takedowns, one of which was a huge double-leg attack for four points.

Hancock, who weighed in at 102 kg, bullied Vera, who was nine kilograms lighter, to a 9-0 technical fall. Hancock got a quick start with a snap down to a takedown right into a gut wrench. Hancock then tacked on exposure and a takedown later for an 8-0 win; however, Vera’s corner challenged the takedown, looking for a leg foul, but it failed, giving Hancock another point and a 9-0 victory.

At 160 pounds, NCAA finalist Tyler Berger, who is one of Burroughs’ primary training partners, showed out against Ohio State wrestler Sammy Sasso. Berger controlled the bout, picking up four takedowns to Sasso’s one that gave him an 8-2 victory.

In the night’s opener at 97 kg, U23 and Junior World silver medalist Kollin Moore was awarded the victory after NCAA champion and multiple-time National Team member Kyven Gadson sustained an injury early in the bout. Gadson led the bout 2-0 at the time of the injury default.