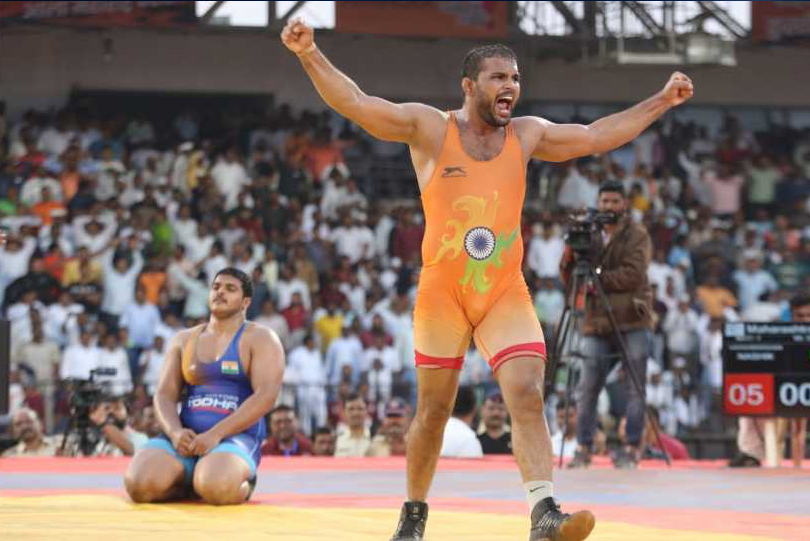 Wrestling News: Harshvardhan Sadgir’s had started his new decade with a positive note after winning the 63rd edition of the Maharashtra Kesari in Pune in January. But little did he know that the joy was destined to be short-lived due to an unknown enemy — Covid-19. The pandemic-triggered lockdown which was imposed on March 26 whitewashed the entire wrestling season which has affected the wrestler’s income. With no mud wrestling (dangals) competitions insight, Sadgir and many wrestlers like him are in bad economic condition. “Wrestling competitions are generally held between March and May. For many of us, our houses run because we compete in these competitions. But the lockdown was imposed in March. So, our economic condition has been impacted,” he said.

Sadgir hails from Akole taluka (district) in Ahmednagar, Maharashtra and trains under wrestling mentor Kaka Pawar. His father is a school teacher and a farmer, while his mother is a housewife. The wrestler has a younger brother too who is an UPSC aspirant. As the schools are closed due to the current situation, he says, the responsibility to run the family is on him.

Also Read: No plans for Vinesh Phogat to compete at the world championships: Coach Woller Akos

“I live in Nashik with my parents and brother. My father teaches in a school and also works on a farm. My brother is studying for UPSC. As the schools are closed, it is my responsibility to run the family,” he said adding that for now things are fine but as things stand they will soon run out of money. “I don’t know what happens next. I request the Maharashtra government to give me a job. a job will give me stability”. As per the norms, the winners of Maharasthra Kesari are eligible to apply for government jobs under sports quota.

The 25-year-old dreams of representing India at the Olympics but the tension about the economic condition at home does not allow him to give full attention to training. “If I have a secure future, I will also be able to fulfill my dream of winning an Olympic medal as I will not be tensed about the economic situation (at home)”. the Maharashtra Kesari winner said.

Future of Dangal amid covid-19

As things currently stand, it is tough to imagine any dangal this season. Jaskanwar Gill aka Jassa Patti who is hailed as the greatest mud wrestler ever says that pandemic has played spoilsport on the entire season. “The main season in Punjab begins from Rakshabandhan to Diwali and there are around 50 dangals daily. But as the cases are continuously rising, it is tough to imagine anything of sorts”. Krishan Saroha echoed Patti’s thoughts and said, “I am constantly in touch with the organisers but everybody has said no to the possibility of holding dangals this year”.

Sadgir pointed out that wrestling amid coronavirus is difficult and it may take a couple of months before the sport resumes. “Wrestling is a contact sport and therefore it is difficult to wrestler under the current situation. We will have to first prepare for the senior national competition, followed by Maharasthra Kesari,” he concluded.