Meet Arjun, another Phogat family wrestler in the making; check out pics 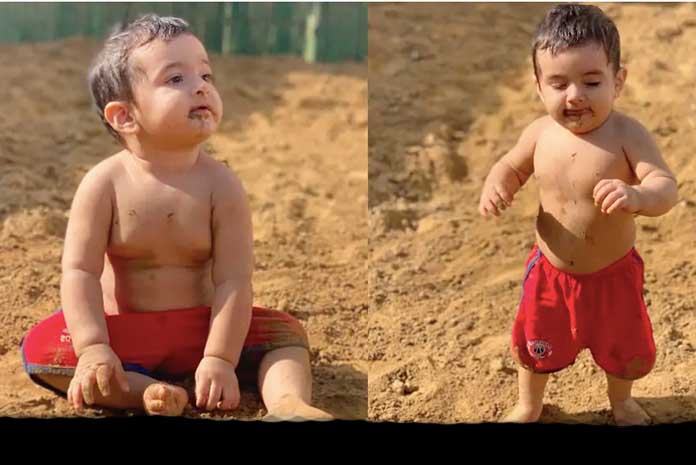 Commonwealth Games gold medallist Geeta Phogat took to Twitter to share a set of pictures of her son Arjun. If you need an instant mood lifter, you should look no further than these heartwarming photos shared by the freestyle wrestler.

She shared pictures of her life’s ‘golden moments’, where her son, Arjun, is seen playing in the ‘Akhada’.

Arjun who was born on December 24 in 2019, is not even one year old and has already started to know the ‘akhada’ to enter the ‘dangal’ when the time is right.

Earlier in September 2019, Phogat had announced her pregnancy through a social media post.

She wrote, “A mother’s joy begins when new life is stirring inside… when a tiny heartbeat is heard for the very first time, and a playful kick reminds that little one is never alone. You never understand life until it grows inside of you.”

HELLO BOY !! WELCOME TO THE WORLD 🥰🤗 He is here 🤗 we are so much in love ❤️ 👶🏻 please give him your love and blessings 🙏😇 he made our life perfect now 🙏👪
Nothing can be described the feelings of watching your own baby be born 😍

Phogat has won India’s first-ever gold medal in wrestling at the Commonwealth Games in the year 2010.

Notably, she is also the first Indian female to have qualified for the Olympic Summer Games.

She got married to fellow wrestler Pawan Saroha in November 2016 who is also a three-time Commonwealth champion and six-time national champion.

With Arjun’s parents’ having such a vast background in the ‘akhada’, it won’t be a surprise to think of him being the next big player in the family.