ONE Championship: 5 biggest MMA fighters from India including Ritu Phogat; Check out 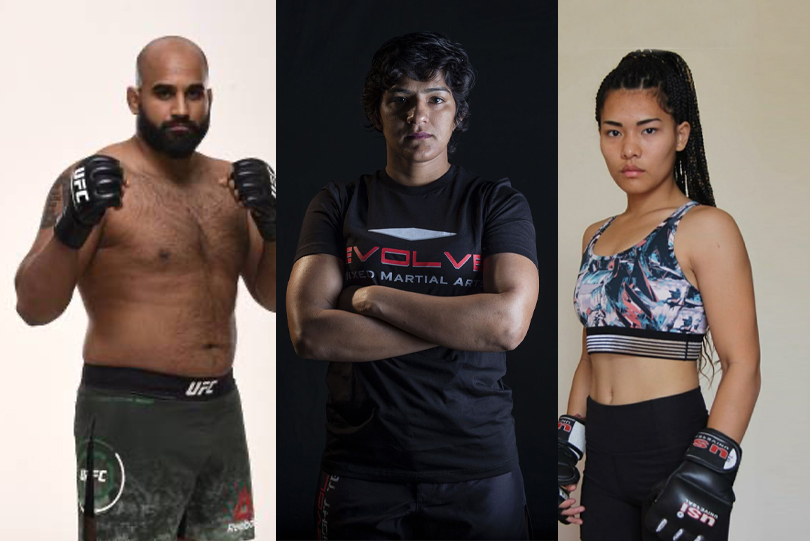 ONE Championship:  Indian mixed martial arts megastar Ritu “The Indian Tigress” Phogat is one of the hottest properties in ONE Championship right now, especially in her home country of India, where she enjoys a massive following.

The former 2016 Commonwealth Wrestling Gold Medalist comes from the famed Phogat wrestling family, having been trained and developed under her legendary father, Mahavir Singh Phogat at an early age.

Following a successful wrestling career, which saw her capture a Silver medal at the prestigious World Under-23 Wrestling Championships in Poland, and three Indian national championships, Phogat turned her eyes towards a career in the ONE Championship Circle.

Phogat made her promotional debut in November of 2019 to much fanfare, winning by impressive first-round technical knockout over South Korea’s Nam Hee Kim. Since then, Phogat has gone on to win three more under the ONE Championship banner to extend her unblemished record to 4-0.

While Phogat is without a doubt the biggest Indian MMA star at the moment, there are a handful of other Indian talents worthy of attention. Here are four other Indian stars on the rise in ONE.

Known as one of the most dangerous heavyweight fighters in the world, Canadian-Indian Arjan Bhullar is one of ONE Championship’s fastest rising stars. He traces his roots to Billi Bhullar village in the Jalandhar district of the North Indian state of Punjab, and frequently makes trips back to help the people in his village.

As a fighter, Bhullar is a strong-willed and well-skilled talent with a knack for overpowering his foes in the Circle. He is a capable wrestler, a Commonwealth Games Wrestling Gold Medalist, and a 2012 Olympian.

After his amateur wrestling career ended, Bhullar shifted his focus over to professional mixed martial arts, making a name for himself in the UFC before joining ONE in October of 2019.

Bhullar is expected to challenge reigning ONE Heavyweight World Champion Brandon “The Truth” Vera for the ONE World Title in 2021, although a date and venue have yet to be finalized due to complications surrounding COVID-19. Still, fans should keep a lookout for anything Bhullar is going to do next as one of the biggest Indian stars in the promotion.

Like Bhullar, rising bantamweight star Gurdarshan Mangat grew up in a small town in Canada, and is the child of Indian immigrants. He pursued martial arts because he was bullied as a child, eventually moving on to become a professional fighter after being inspired by MMA legend Rich Franklin.

In his twenties and with practically no competition experience prior, Mangat began his trek towards becoming one of the world’s most talented mixed martial artists. He spent some time competing in the regional circuit, winning the BFL Featherweight Championship, before joining the world’s largest martial arts organization, ONE Championship, in March of 2019.

“St. Lion”, who has previously trained with ONE Bantamweight World Champion Bibiano Fernandes in Vancouver, is getting better with each fight, and it’s only a matter of time before he’s considered one of the top fighters in his division.

Full-blooded, India-born atomweight Asha “Knockout Queen” Roka fuses beauty and brawn in a 52.2-kilogram package. The former Indian National Boxing Champion has been in the fight game for nearly her entire life, beginning with boxing at the age of 11, going on to represent her country in various amateur tournaments before turning professional in 2016.

After going undefeated at 3-0 in the ‘Sweet Science’, Roka then shifted her attention to mixed martial arts, embarking on a professional career in 2017. “Knockout Queen” racked up four impressive first-round finishes in regional promotion Super Fight League in less than two months.

Eventually, she was picked up by ONE Championship, and now competes among the best martial arts talent in the world. Roka has grand designs on a run at the ONE Women’s Atomweight World Title, and if she can garner a few solid wins under her belt, she may very well get the chance to compete for gold soon enough.

Originally from Kerala, which is where he earned his nickname of “The Kerala Krusher,” Singapore-based Indian fighter Rahul Raju is one of ONE Championship’s most solid lightweight talents.

After moving to Singapore in 2011 to pursue his education, Raju began training at the renowned Juggernaut Fight Club, competing in a variety of combat sports before ultimately dedicating full focus to a career in the cage.

Along the way, Raju captured the Ultimate Satira Championship, and even bagged a few wins in the Singapore Fighting Championships, before joining ONE in 2018. Now a veteran of the sport, Raju has faced some tremendous opposition in the Circle, including submission grappling superstar Garry Tonon, former ONE Featherweight World Champion Honorio Banario, and former ONE World Title challenger Amir Khan.

At his best, Raju is a well-rounded fighter with solid striking and grappling skills. He is a capable finisher, having ended six of his seven wins inside the distance and in exciting fashion. Raju is definitely one to watch out for.