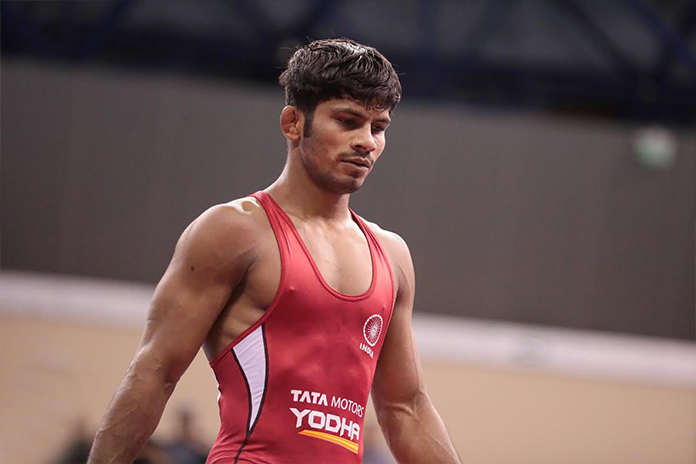 Rahul Aware returns from the UWW World Wrestling Championship medal from Nur-Sultan, Kazakhstan. His father is a wrestling coach. But it was not the hidden talent that had persuaded Balasaheb Aware to force son Rahul into this physical sport. Rather, Rahul’s journey to the World Championship medal and much more to come had started as father wanted him to get rid of his unwarranted temperament.

Balasaheb Aware recalls the day he identified a wrestler in his “hot-headed” son and decided to channelise that raw aggression into sport. He never regretted his decision.

On Sunday, that “fighter-cock” boy from a nondescript village in the Marathwada region of Maharashtra who has grown into a brawny Rahul Aware, did his country proud by clinching a bronze at the World Wrestling Championship.

The grappler outclassed Tyler Lee Graff, the 2017 Pan- America champion, 11-4 in the 61-kg bronze play-off in the bout.

“Rahul used to quarrel a lot when he was in school. He was a short-tempered kid. Everyday some or the other villager would come to me with his complaints. It was then when I recognised the wrestler in him. His hot-headed nature helped him become a good wrestler,” says Balasaheb, himself a wrestler, from Patoda village in Beed district of Maharashtra.

“Rahul’s journey in wrestling began with his hot-headed nature,” he recalled.

Balasaheb, who runs a free training centre for budding wrestlers in the village, said Rahul deserved a gold medal. “But for that he need to work harder,” he added.

A proud father for now is celebrating the World Championship bronze. “Rahul’s historic win is the happiest moment for me. I was also a wrestler but due to lack of guidance I could not excel. I used to travel and had stayed away from my family till 1985-86. During that period, I participated in many a wrestling bouts at various fairs,” he reminisced.

Balasaheb added that there were days when his annual family income used to be a mere ₹15,000. “We survived like this, and today such a big win of Rahul makes the entire town happy,” he said.