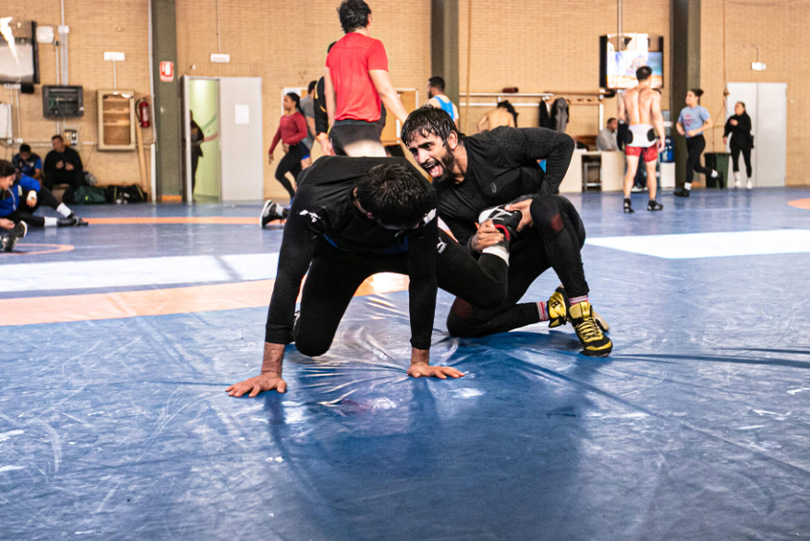 Repeat unto perfection! It is the new mantra adopted by Shako Bentinidis to train Bajrang Punia in the USA. Shako says it is important for the Indian wrestler to push himself and perfect his techniques and the camp has been very useful in doing so. “It has been a tough one year, and so he needs to be strong mentally and focus on the process rather than the result,” he told WrestlingTV in an exclusive interview.

The Indian wrestler has been training at Cliff Kean Wrestling Club in Michigan since December 4. Originally scheduled to return in January second week, the Sports Authority of India (SAI) extended his training camp by a month under its Mission Olympics programme.

Shako says since their arrival, they have been making a lot of progress which was not possible in India due to lack of sparring.  Punia echoed his Georgian coach’s thoughts and said: “All facilities here are available, there is a gym. Moreover I am getting good sparring partners. The college boys who train here are good as well. I am getting access to everything I need to improve my level,” the 65kg men’s freestyle wrestler said.

The duo is currently working on increasing focus on the mat and functionality. Shako believes it will be important when the three-time world medallist, who has already qualified for the Tokyo Games, returns to the mat.

“I am working on increasing his focus on the mat. I make him not lose his concentration when he fights,” but when he does “I stop him immediately, fix the problem and make him work all over again from zero. Until he fixes it, we continue the same drill repeatedly”.

Bajrang has often been criticised for his lack of leg defence and has even cost him crucial matches including his Asian Championship match against Japan’s Takuto Otoguro. However, he has been working on it regularly along with adding new techniques to his arsenal.

“He has greatly improved the technical aspects, now it is necessary to add functionality to it,” Shako said. “We are adding new techniques. We have been working on this for a long time and have begun to work well for defence as well,” he added.

Bajrang competed in two exhibition matches in the past two months. In the first one, organised by FloSports, the 26-year-old beat two-time World medalist James Green  8-4 to win $25,000 paycheque.

However, he could not continue the performance in his next game, where he lost to unranked Zain Retherford.

He is now looking for one more competition on January 22 before returning to India. “Maybe we might compete on January 22. But we are not sure for now,” Shako said. Bajrang will return to India in first week of February, and will continue training for the upcoming United World Wrestling (UWW) tournaments. “We have our eyes set at the Matteo Pellicone Rome Rankings (in March) and Asian Championship (in April),” he added.