Sakshi Malik Exclusive: I will solve the Sonam puzzle soon, will take back my place for Olympics in 62kg 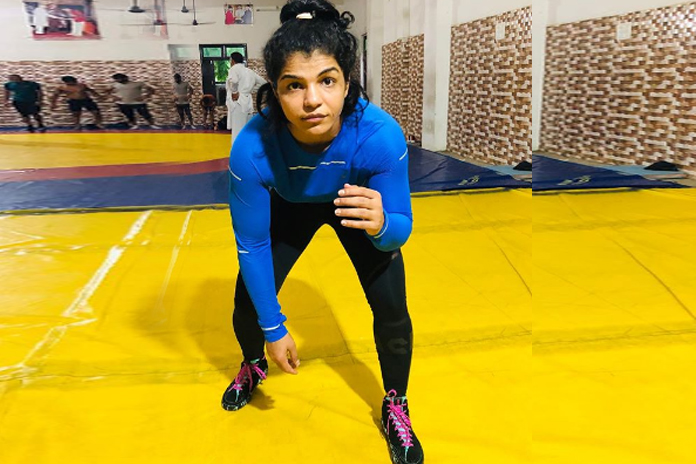 March 30, 2020 0Comments 295Views 0Likes
Two back-to-back loses to Sonam has affected Sakshi Malik mentally. But now with Tokyo Games postponed due to COVID-19 widespread, the 2016 Rio Olympic medallist believes that she will be ready for the Sonam challenge the next time they meet for a place in 62kg weight class. “Yes, I lost to her twice. But I believe, with Olympics postponed I will be ready for her,” she says.
Ever since losing her place to the 18-year-old grappler, Sakshi has been under a lot of pressure to prove her mettle. The duo has fought twice and on both the occasions, the 27-year-old Olympic bronze winner lost in the dying seconds of the match.
In the first bout in the national trials in January Sakshi was leading by 10-6 but gave four-points to Sonam in the last seconds. With the score level at 10, the latter was declared the winner. It meant that she had to compete in the non-Olympic category of 65kg at the continental championship. Owing to her medal-winning performance and Sonam’s failure at the Asian meet, she along with other wrestlers were given another shot for a place in the Indian team for the Asian Olympic Qualifiers. Sakshi comeback to her usual 62kg category and took on young Sonam for the second time. But despite a close match-up she again ended up on the losing side and this time by margin of 2-3.
Also Read: 4 Russian wrestlers including World Silver medallist Idrisov injured in car accident
“I do not know what happens. I start strongly and dominate the match but then in last one minute pressure gets me and I lose focus,” she told WrestlingTV. “In the second encounter we had, in the last minute I lost my concentration and made mistakes which cost me the bout,” she added.
Now, with another year to prepare herself, Sakshi believes she can solve the Sonam puzzle.
“Due to these last-minute loses, I have started questioning myself and my ability. But now, I am trying to change that and am being helped by a psychologist. Satyawarth (Sakshi’s husband) is also helping me to prepare myself mentally”.
On the psychologist’s advice, the 27-year-old wrestler now practices meditation and also is reading motivational books. She believes that it will help her to build positive thoughts.
“They [Satyawarth and mental trainer] keeps advising me to practice meditation to calm the mind. I also read good books. All this is helping me,” she said. “If my luck will be by my side, I will take back the 62kg spot for the Olympics,” she added.
Sakshi as all the athletes is in self-quarantine due to the Coronavirus outbreak but makes sure to do individual training to keep herself fit.
“I miss sparring on the mat but considering the condition, lockdown is the best decision. I now train at home only until things get back to normal,” she said.
Wrestling (Kushti) fans can catch Live Streaming, Highlights, News, Videos, Photos, Results and Rankings on WrestlingTV