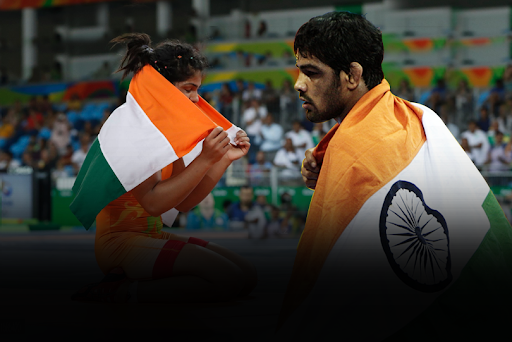 Wrestling News: Sakshi Malik was 16 when Sushil Kumar climbed the top of the podium at the world championships in Moscow, Russia. It was the first time that India, a country which weren’t supposed to dominate the world events in any sport, bagged a gold medal at a world event. Malik who was still four-years away from repeating Kumar’s Olympics heroics in women wrestling, says, it was a very special moment for us. “India had won its first world gold medal, so it was special for everyone. I was very happy and I had a goal now, emulate him at the Olympics and world championship,” India’s first women Olympic medallist says nostalgically.

On the back of his bronze medal at the Beijing Olympics in 2008, Kumar landed in Moscow as a dark-horse. Despite his stellar performance in Beijing, no one was ready to bet their money on him to bag a medal, let alone gold. But as the day progressed, the wrestler continued to defy all odds.

Then came the moment. It was the evening of September 12, 2010. He was up against the 2010 junior world champion Alan Gogaev in front of a hostile home crowd. Reliving the moment, the 37-year-old said, 2010 was the best year of his career. “The year was the best for me. Wherever I went, I won gold. Asian Championships, World Championships. Then the icing on the cake was beating a Russian wrestler in Russia,” the Tokyo Olympics hopeful said. He beat Gogaev 3-1.

And if anyone thought his Olympics bronze medal was a fluke, he changed that perception too and breathed new life to Indian wrestling. His worlds gold medal now gave young wrestlers like Bajrang Punia, Sakshi Malik and many others hope to dream big.

Kids thronged to akhadas in villages in Haryana, Delhi and Uttar Pradesh. Not only boys, but parents were ready to break social stigmas and send their girls to akhadas, a place where girls are seldom seen. New wrestling pockets emerged and broke the dominance of traditional powerhouses like Haryana and Maharashtra.

Malik, who still finds it to be one of her best memory, says, it gave her hope that anything can be achieved. “After he won, me and many other wrestlers now wanted to reach the same height as Sushil Kumar”.
Kumar beat Anastasio Akritidis of Greece, 6-2, in the opening round followed by Martin Daum of Georgia, 4-1. Mongolia’s Buyanjavyn Batzorig failed to challenge in the quarter-final and lost 9-1 before Kumar jerked out a close 4-3 win against Jabrayil Hasanov of Azerbaijan in the semi-final.

What he started at the beginning, the result of it reverberated at the turn of the decade in Nur-Sultan when India won five –Bajrang Punia, Rahul Aware, Ravi Dahiya, Deepak Punia and Vinesh Phogat — the best performance.

In the meantime, Kumar had added a silver medal at the London Olympics to his already glorious hat, making him India;s first-ever individual to win multiple medals at the Games. But his 2008 and 10 antics were enough to put the country on worlds sporting map and gave youngsters a new hero who was not a cricketer or a footballer.