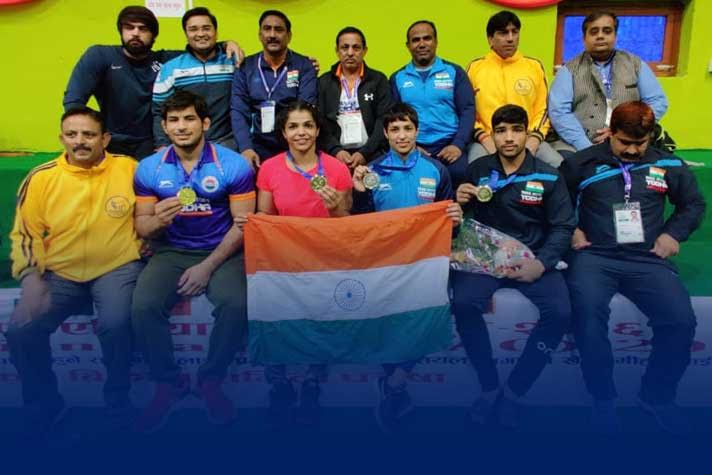 December 8, 2019 0Comments 910Views 0Likes
Indian wrestlers golden show continued on the day 3 of the wrestling competition in the South Asian Federation games wrestling (Kushti) competitions. India once again kept the perfect record of winning gold medal in each category they have entered by winning 4 more gold medals on Sunday. Today was the turn of Rio Olympic medallist Sakshi Malik (WW 62Kg), U23 World Silver medallist Ravinder (61kg), Anshu (59kg) and  Pawan Kumar (86kg)  to register gold medals for India. India has entered 12 wrestlers in the competition till Sunday and all 12 have won gold medals for the country that too with tremendous ease.
Sakshi Malik (62kg) & Anshu (59kg) wins gold
Out of form Rio medallist Sakshi Malik was too good for this level as the Indian champion won all the bouts with 10-0 margin or by pinning down the opponents to win the gold medal for the country. Same was the case for Anshu in the 59kg category. The competition levels were so abysmal that not even once the opponent wrestlers from countries like SriLanka, Nepal and Bangladesh looked liked scoring even single point against the Indian girls. Anshu won her final bout against the wrestler from Sri-Lanka in record 15seconds. Sakshi won her first bout against the Sri-Lankan wrestler in 38secs and against wrestler from Bangladesh in under 90 seconds.
Also Read: SAF Games 2019 Wrestling : Satyawart Kadian wins gold medal defeating wrestler from Pakistan in 97kg
Ravinder (61kg), Pawan Kumar (86kg) defeats Pakistan wrestlers to win Gold
In the men’s category some interest was generated because of the presence of wrestlers from Pakistan. But that presence and challenge wasn’t enough to stop the winning march of both Ravinder and Pawan from winning gold medals.
In the 61kg – Ravinder was too strong for his opponents. After routing Bangladeshi and Sri-Lankan wrestler in the first two rounds, it was expected that M.Bilal from Pakistan will give him some fight. Ravinder started little slow and survived some anxious moments against Bilal. The first round ended with score 2-2. In the second round Ravinder proved his superiority to clinch the bout and gold medal for India.
In the 86kg – Pawan Kumar was in some trouble initially against the national champion from Pakistan. His experience kept him in good stead as he finally registered hard-fought victory by 4-1 to clinch gold.
Earlier on the first two days of the wrestling (Kushti) contests India won all 8 gold medals they had entered. The wrestling (Kushti) competitions in the SAF Games 2019 are being fought in 20 weight categories, 10 each in men and women. As per the rules of SAF Games, each country can enter maximum of 14 categories out of 20. Indian wrestlers are participating in 14 categories and have already won 12 gold medals. On the last day of the SAF wrestling competitions on Monday Gaurav Baliyan (74kg) and one more super-mom of the Indian team Anita Sheoran (68kg) will be in action and will try to keep the perfect record of India intact.
Wrestling fans can catch Live Streaming, Highlights, News, Videos, Photos, Results and Rankings on WrestlingTV
SAF GAMES 2019 Wrestling : Gold Medal Winners for India
FS 57 Kg  – Rahul Kumar
FS 61 Kg  – Ravinder
FS 65 Kg  – Amit Dhaiya
FS 86 Kg  – Pawan Kumar
FS 97 Kg – Satywart Kadian
FS 125Kg – Sumit Malik
WW   50 kg – Sheetal Tomar
WW   53 kg – Pinki
WW   57 kg – Sarita Mor
WW   59 kg – Anshu
WW   62 kg – Sakshi Malik
WW   76 kg- Gursharanpreet Kaur.
MONDAY – Two more Indians will be in line for Gold Medals
FS     74 Kg  – Gaurav Baliyan
WW  68kg: –  Anita Sheoran
Watch the Indian wrestlers LIVE at South Asian Federation Games 2019 only on WrestlingTV.in