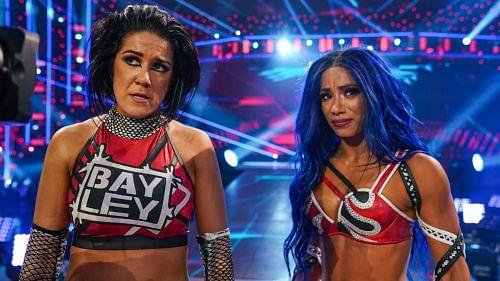 October 8, 2020 0Comments 2389Views 0Likes
WWE News: WWE draft is all set to take place this Friday night live on Smackdown. However, this week’s Smackdown will also hold the epic Women’s Championship match that will take place between the two former friends the current Smackdown Women’s Champion Bayley to clash up against Sasha Banks.
The Boss Sasha Banks is now fully recovered and ready to take on Bayley this week on SmackDown. The WWE had been expecting the two ‘best friends’ to turn on each other soon after they lost the Women’s Tag Team Championships.
As per reports, the original plans were to have the feud around SummerSlam, but WWE chose to delay that because of how impressed they were with Banks and Bayley as a tag team.

According to Cagesideseats, they have stated that Bayley and Sasha Banks will now have a long term feud that will surely go ahead after Hell in a Cell and maybe after that too.
Sasha Banks and Bayley were the prime focus of WWE during the ‘Performance Center’ era. The two were regulars on both RAW and SmackDown. The Role Models held not only the Women’s Tag Team Championships but were also the RAW and SmackDown Women’s Champions respectively.
Future Plans for Bayley and Sasha Banks

WWE is planning to keep this rivalry as on the top and let these two former “Golden Role Models” book even after Hell in a Cell 2020.
Bayley has been the longest-reigning SmackDown Women’s Champion in history and it will be a historic moment if Sasha Banks becomes the one to end this reign by becoming the new SmackDown Women’s Champion.
Given how popular this program is with the WWE Universe, the company may decide to extend it up until WrestleMania 37.
1
0
0
0
1
0
0