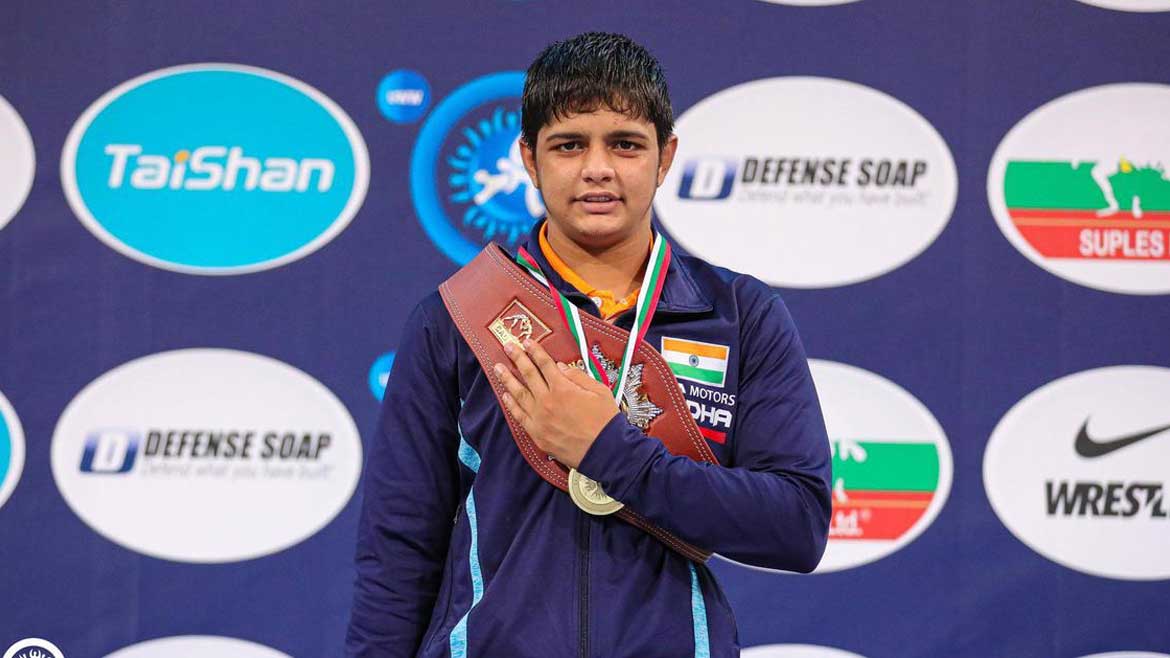 The adulation for the upset win over the Rio de Janeiro Olympics bronze medallist Sakshi Malik is a thing of the past. The teen sensation and two-time cadet world champion Sonam Malik, who had emerged as an overnight hero at the Wrestling Federation of India’s trials last month, will be under scanner at the Asian Wrestling Championships in New Delhi next week.

The 18-year-old Haryana girl with big dreams for the Tokyo 2020 Olympics Games will first have to prove her mettle in Asian Championships, slated from February 18 to 23.

The two-time World Cadet Champion, who was eliminated in the first round in her maiden senior Indian appearance at the Rome ranking series, is well aware what she needs to cement her place in the squad for the Asian Olympic Qualifiers.

Speaking to WrestlingTV.in from the WFIU training camp in Lucknow, Sonam said, “Gold is my only aim for the Asian Championships and if I perform well in the Asian Qualifiers as well, I will eye for a medal in the Tokyo Olympics, which is my ultimate dream.”

She is following a strict fitness regime and concentrating heavily on leg defence and aggressive attack. Sonam is also working on the strategy to deal with the Kyrgyzstan and Japanese opponents, who she feels will be her most formidable opponents at the New Delhi event.

In a candid chat with WrestlingTV.in, Sonam talked like a seasoned pro about her challenges and goals. Here are the excerpts.

WrestlingTV: You became an overnight sensation with a win over Sakshi Malik. How did it change you as a wrestler?

Sonam Malik: It definitely made me more confident. But then I failed to deliver at the Rome Ranking series. So it is back to the square one. A present I will only say that the win over Sakshi Ji has given me an opportunity to represent India. Now, I want to establish myself in the Indian team. Asian Championships is crucial for me from that aspect.

WrestlingTV: How are your preparations for the Asian Wrestling Championships?

Sonam Malik: We are working on a certain plan as the national camp here (in Lucknow). I am working very hard on my weaknesses and concentrating especially on leg defence and aggressive attack. In the Rome Ranking series, I was eliminated in the first round after having suffered an elbow injury. I cannot afford a that in New Delhi (Asian Championships).

WrestlingTV: What keeps you motivated during such hard training sessions?

Sonam Malik: I know what it takes to achieve the tough goals I have set for myself. My coach has planned a strenuous fitness regime for me. I am moving forward accordingly. Of course, I do feel drained out at times. However, when the aim is the gold (at the Asian Championships), there is no scope for a break. Having said that, I also ensure to take adequate rest.

WrestlingTV: What are your plans for the Tokyo 2020 Olympics?

Sonam Malik: Winning an Olympics medal is the ultimate dream. There is a strategy and strict training regime to follow for that. For now, the focus is only and only on the Asian Championships. It’s one step at a time.

WrestlingTV: Who has been your biggest inspiration in wrestling? Your favourite wrestler?

Sonam Malik: Sushil Kumar any day. I follow him and keep watching and re-watching his bouts. There is always a new thing to learn from his fights. In the international circuit. I have also learnt a lot of techniques after watching videos of  Iran’s Reza Ahmedali, the current world number 6 in 57kg freestyle wrestling.

The two time world cadet champion is not new to dealing with the pressure of an international event. However, graduation from the colts to the elders stage has its own challenges and hardships. There is no consideration for mercy for the age factor. Sonam has realised that factor well in time. However, the Asian Championships can be a make or break for her Tokyo 2020 dreams as Sakshi Malik has still not given up the hope of earning and India berth for the 2020 Olympics.