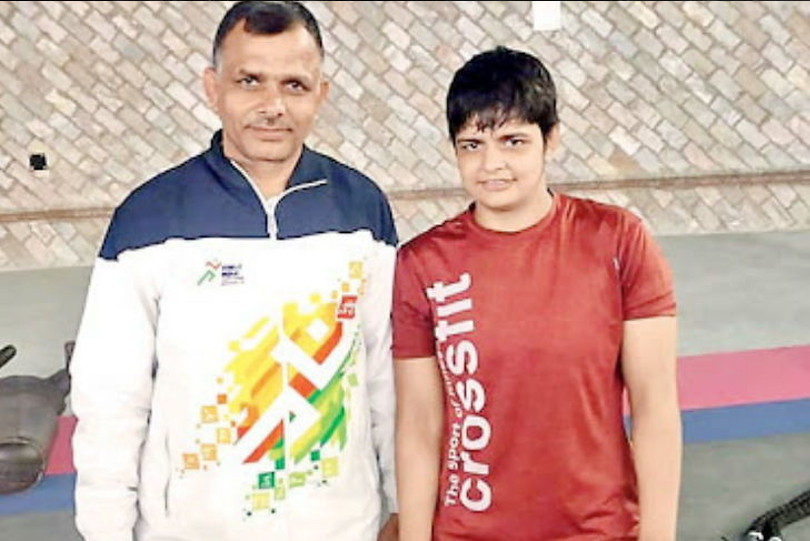 Wrestling News: Doing training of different sports is a common sight in cricket and football but never was the method used in a sport like wrestling until now. Sonam Malik, twin cadet world champion and currently the top-ranked wrestler in 62kg women’s weight category in India has taken up tennis as a part of her preparations for the Tokyo Olympics. The 18-year-old wrestler is currently training at Netaji Subhash Chandra Bose Sports Complex under the guidance of coach Ajmer Malik. Every week she along with other fellow wrestlers do one session of tennis to improve their skills on the mat. “It is more of a fitness and target training. It helps me improve my speed and reflexes,” she said.

Ajmer is a retired Army personnel who is now the head coach at the sports complex which houses both wrestling and tennis players. As a part of the training module, the coach makes athletes of both sports compete against each other. He says this helps in building confidence and personality. “I make them do circuit training. It is more like a competition between tennis players and wrestlers. I do this to help the wrestlers increase their endurance and speed,” adding Sonam is benefitting from it the most.

The wrestler, he says, is still under-confident and this is her biggest weakness but when she competes for every weak in small games it instils self-belief in her. “We want her to improve. This way or that, our goal is to help her create history. Sakshi created history by winning India its first Olympic medal in women’s wrestling. Now, we want to take a step forward and change the colour of the medal. Currently, Sonam holds back during the matches. It is due to the fact that she is still getting used to the senior level. But that is what we are here for and training sessions like this is a great way for her to build that competitive spirit which she currently lacks,” Ajmer said. “When the tennis athletes and wrestlers compete whichever faction loses, they then wait eagerly for the next week to take their revenge. This way everyone is on their toes. Sonam is always made the team leader which is good. It will help her get a sense of leadership,” he added.

Sonam has set her sight for the proposed world championships which are likely to be held in December in Serbia if all goes well. Besides mental exercises, Ajmer says, he is making her build strength to compete with her senior counterparts. “We have the world championships approaching, so, our focus is to help her increase strength so that she can compete with the senior wrestlers. She has been performing well on the mat and hope she can emulate the same in Serbia,” he said.