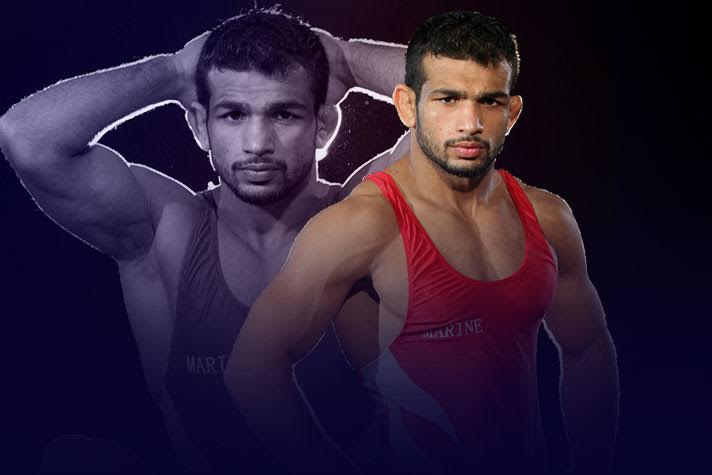 He was the ‘wonder-boy’ of Indian wrestling (Kushti) even before the Indian wrestling’s (Kushti) current mega-star Bajrang Punia started conquering the world. Amit Kumar Dhaiya, the youngest ever Olympian wrestler at the age of 17. On an injury break since year 2015, Dhaiya is back to what he does the best, pinning opponents on the mat.

Dahiya was the story of the day of the first day of the nationals in Jalandhar.
Once the wonder boy 24 year old Dhayia was a veteran of sort at the stadium on Friday. Dahiya won his first national gold medal. Bumping up two weight categories to 65 kg, Dahiya won the final with technical superiority. Surprisingly, Dahiya had never won a gold medal before at the national-level despite winning an Asian gold, a World Championships silver and representing India at the Olympics in 2012.

“I WAS PREPARED TO WIN THIS AS I HAVE NEVER WON ONE,” HE SAID. “I CAN CALL THIS MY OFFICIAL COMEBACK. Though it turned out to be more difficult than I expected, it’s a good start to the new weight category and I will continue to wrestle in this.”

Dhaiya further added that now I will look forward to competing for the country after long time in the SAF Games.

“I am raring to go once again. I want to win once again and will look forward to SAF Games. If everything goes well there, will be competing in the Asian Championships in February” confirmed Dhaiya.

Dhaiya was the cynosure of all eyes when he reached last 8 of the London Olympics and further proved himself when he won the world championship’s silver medal at just 18 years of age. The wrestling (Kushti) world was at his feet, when the knee injury stuck.
Dhaiya rues the timing of his injury, “I was 20 at the top of my game, when in 2015, injury stuck and post that I could not compete, hopefully I can make a successful comeback”
Coming from Sonipat’s Nahri village, Dhaiya has special connection with the Indian wrestling’s (Kushti) new kids on the block Ravi Dhaiya & Deepak Punia. Both of them have booked their places for Tokyo 2020 and train are groomed from the same stable of Indian wrestling (Kushti)

“Chatrsal Stadium” from where Amit came from. Dhaiya is mighty impressed with the talent of both these Indian wonder kids.
According to the 2013 Asian Champion both Ravi and Deepak are rare talents and have potential to win at Tokyo. “I have seen them wrestling (Kushti) since they were kids, they are great talent, they can win medals for India at Tokyo 2020”

With all the talent and new kids around, Amit Dhaiya now himself want to rewrite his story – story which is more memorable than his earlier journey in the world of wrestling.