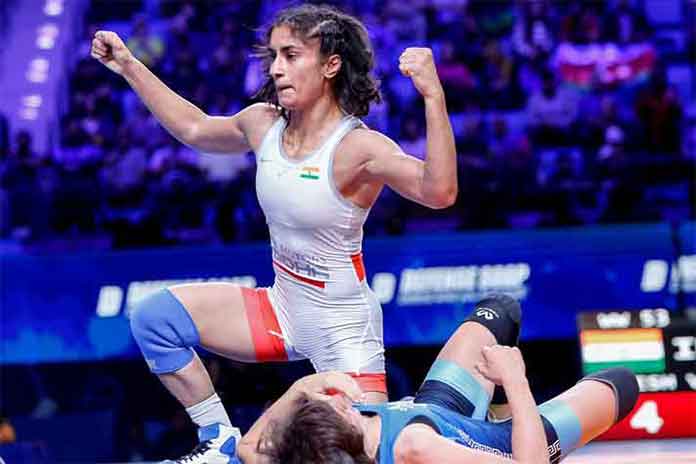 Vinesh Phogat will be the top ranked contender for the women’s 53 kg title in the New Delhi 2020 Asian Wrestling Championships. Her path to an expected gold is somewhat eased by North Korea, who had 53kg World No. 1 Pak Yong Mi in their ranks. However, the Chinese and Japanese girls still remain formidable challenger for India’s most-decorated international women wrestler.

Vinesh has started her 2020 with the gold at the Rome Rankings Series. She would be fancying to replicate the performance at home now. Having fought in the 50kg and 48kg categories previously, Vinesh feels she still needs more exposure in the 53kg category despite the fact that she already had proved her class in Rome

“It’s am yet to complete one year in this weight category (53kg). I need more matches,” she had told Wrestling TV earlier. “We’ve been waiting for a competition in India, and now (that’ll be) the Asian Championships. When you (wrestle) in your hometown, the feeling is incredible and I am waiting for Asian Championships in Delhi.”

While Vinesh starts favourite, she will have to guard against Mayu Kukaida of Japan and Pang Qianyu of China.

While there is nothing new to say about Vinesh’s potential, here are brief profiles of her major challengers:

The World No. 3 will be one of the favourites to climb the podium at the Asian Championships. If the two grapplers meet, it will be a revenge bout for the Vinesh. The last time the duo met at the 2019 World Championships, Mukaida defeated Vinesh. The Japanese wrestler went to win silver the world championships.

A seasoned wrestler, Mukaida has participated at the Asian Wrestling Championships four times, out of which she won three. As for Vinesh, she has never won a gold at the championships.

Ranked at the fourth spot in the 53kg world rankings, Pang could be a formidable opponent for the Indian wrestler. In her last appearance at the continental event in 2019, Pang finished at the fifth spot. However, since then, the Chinese wrestler has been on a roll. She has secured two medals in her last two tournaments — World Cup and RS – Matteo Pellicone Tournament.

The significant achievements for the 23-year-old Pang include the 2016 Asian Championships gold at Bangkok and two bronze medals at the World Championships in 2018 and 2019.