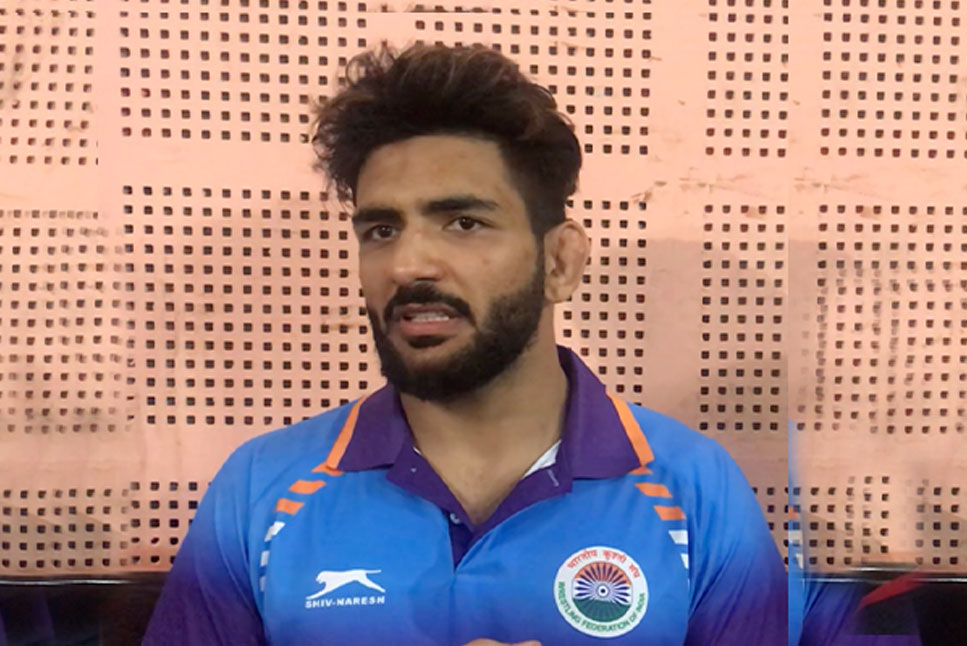 Not long after Sandeep Singh’s arm was lifted after his close win in the 74kg finals at the Olympic Qualifier trials in New Delhi on Tuesday, he instinctively leant forward to touch senior Amit Dhankar’s feet. This seemed like a movie scene played in a loop. The Punjab wrestler with coloured hair did this after every match against senior wrestlers, be it after defeating Narsingh in the semifinal or in fact after a gold medal win at the national championship against Jitender in January.

It was a gesture of respect for Dhankar and others — who have proven their mettle at various UWW tournaments — and is amongst the senior-most wrestlers in Sandeep’s category. The gesture might seem a little extreme, but according to Sandeep, a win or loss, they are his seniors and it is a way of showing to them. “I know that I won but he is still my senior wrestler. It is our tradition to touch the feet of seniors, and in wrestling, it is not different,“ the Punjab wrestler says.

Sandeep — courtesy of his 2-1 victory — will now be India’s official entry for the Asian Olympic Qualifiers from April 9 to 11 and Asian Championship from April 13 to 18 in Almaty, Kazakhstan. He was amongst the 12 wrestlers who were competing for the spot in the Indian team in the deepest men’s weight division of the country.

The 21-year-old is still inexperienced at the international level, having participated in just four competitions starting 2017. He has competed in one cadet, two junior and two senior competitions so far. In his last competition, the Matteo Pellicone Rome Rankings Series in Italy, Sandeep failed to qualify. However, the youngster says, he was not at his best when he reached Rome for the tournament.

“It was a tough bout for me. I was just not in the best shape to compete that night. One of the reasons for it was repeated COVID-19 tests and travel. None of us including me knew what was out the weight and what should we eat too and what not to. In the end, I ended up retaining a lot of water and was bloated during the bout,” he says.

But that is now in the past. Sandeep now sets his sights on the upcoming competitions in the build-up to the Olympics. Interestingly, his journey to the Olympics had begun at the age of 12.

Decision between Wrestling and Kabaddi

His dream, ever since he was a kid, was to represent the country at the quadrennial event. For the son of a farmer in Barijati village in the Mansa district, Punjab, a career in sports was never the first choice. There was no sports hero for several miles around his village but things changed for him after 2008.

Sandeep’s uncle Jagjeet introduced the nine-year-old to wrestling. But it was not an easy decision. He says, he had a choice between kabaddi and wrestling, and the latter was an automatic choice.

“I use to go to watch kabaddi and wrestling matches. I had to choose between the two and wrestling was always my first choice,” he says. “My uncle kept telling me about the Olympics. About how big they were and how important a medal was. It was initially my uncle’s dream and then that became my dream as well.”

Indian wrestlers have been known for brute upper body strength and stamina. However, they lack ground wrestling, which has cost them big matches throughout history. But Sandeep has a different wrestling style.

Unlike his counterparts, the Punjab-born has an attacking approach. He is agile and can switch gears as per the situation. Also, he attacks the legs and can defend against ground attacks too.

“I strategise according to the situation of the game. Like today, I knew they (Narsingh and Amit) were good with defence so I had to get points early in the bout,” he says.

His coach believes it’s all part of the learning curve. “We analyse his game after every competition and work on the shortcomings. We wanted to make him a complete wrestler. We made him train with Greco-Roman wrestlers, worked a lot on his ground wrestling and now we are seeing the result of all the hard work,” Sukhmandar says.

Sandeep has returned home and will join the national camp soon. During his time at home, he says, “I will now watch all my videos and discuss with my coach and Jagminder sir (Indian team Head Coach) to prepare for the Olympic Qualifiers. It will be a good testing ground for me and hope to make it to the big stage,” he smiles and sighs off.