Tokyo Olympics Wrestling LIVE: Ravi Dahiya confirms a medal, pins down Nurislam Sanayev, moves on to the finals of the 57 kg men’s freestyle 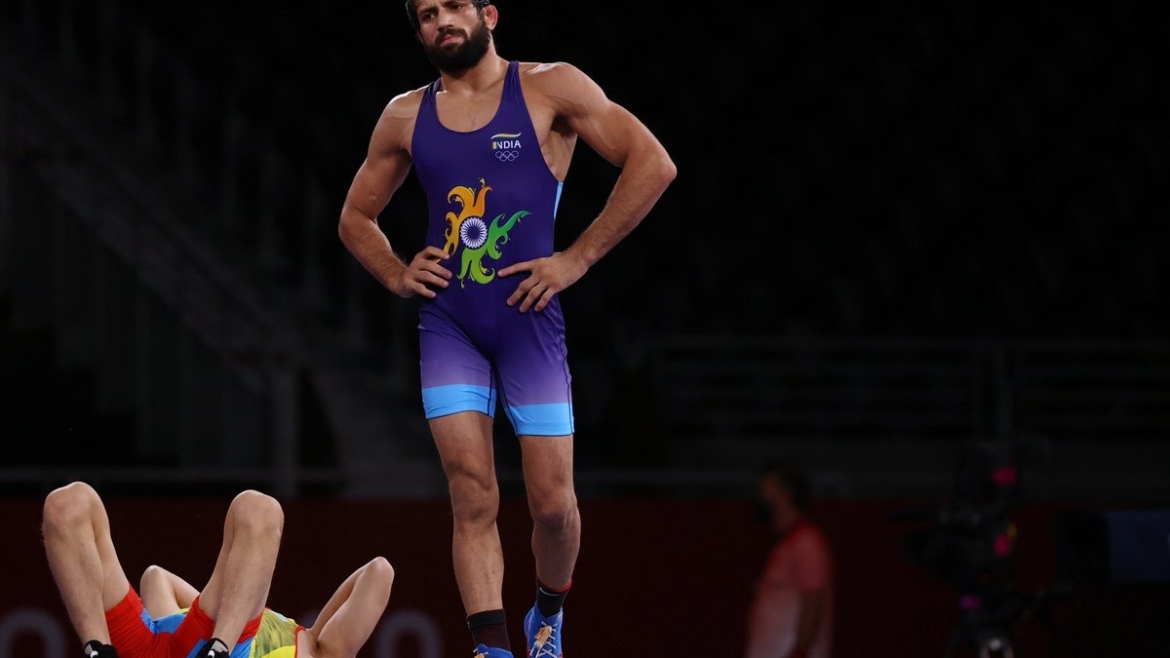 Tokyo Olympics Wrestling LIVE – Ravi Dahiya Semifinals: Indian wrestling’s pride Ravi Dhaiya has defeated World Championship medallist Kazakhstan’s Nurislam Sunyaev in the semifinals of the 57kgs men’s freestyle. He moves on to the finals of the event and will play his bout tomorrow. It was not an easy bout for Ravi, considering he was down 9-2 in the 2nd round. However, after Ravi slammed down Sanayev, he got injured and required some time. After that, it did not take a lot of time for Dahiya to pin the Kazak down. Even though, Sanayev was up 9-7, Ravi won the match by pinfall

India grappler Ravi Kumar Dahiya stormed into the finals of the men’s freestyle 57kg category at the Tokyo Olympics after defeating Kazakhstan’s Nurislam Sanayev in the semi-finals here at Makuhari Messe Hall A, Mat B on Wednesday. The Indian wrestler won by fall.

Dahiya will now contest the finals on Thursday and he is the first to enter the final since Sushil in 2012. In the first period, Ravi Dahiya managed to take a 2-1 lead and in the second period, the pressure was entirely on Sanayev.

Sanayev bounced back strongly in the second period and he quickly eradicated the lead of Dahiya. Early on, in the second period, the entire pressure was put on the Indian grappler. In the end, Dahiya staged a comeback and as a result, India has been assured of a silver medal.

Earlier on Wednesday, Ravi Kumar Dahiya had stormed into the semi-finals of the men’s freestyle 57kg category. Fourth-seeded Ravi defeated Bulgaria’s Georgi Valentinov Vangelov by pure brute strength and agility at Mat A by 14-4.

@2:44 PM: The winner of this match will play against Iran’s Atrinagharchi or Russian Olympic Committee’s Uguev in the finals.

@2:44 PM: The winner of this match will play against Iran’s Atrinagharchi or Russian Olympic Committee’s Uguev in the finals.

@2:35 PM: We are just 10 minutes away from the much-anticipated semifinals. Stay tuned to get all the live updates as Ravi Dahiya faces Nurislam Sunyaev.

@2:15 PM: We are just 30 minutes away as Ravi Dahiya takes on Kazakhstan’s Nurislam Sunyaev for a place in the men’s freestyle 57 kgs finals.

Now in the SemiFinals scheduled for today Ravi Dhaiya will take on Kazakhstan’s Nurislam Sunyaev & Deepak Punia will fight World Championship winner from USA Deepak Taylor in other SemiFinal in 86kg – Follow LIVE updates from both bouts at 2.45 PM with InsideSport.co

@9:36 AM: Another win on technical superiority sees Ravi Dahiya in the semifinals. He will face Kazakhstan’s Sanayev Nurislam.

@8:14 AM: Bulgaria’s Valentinov won by technical superiority 11-0. He will take on the winner between Ravi Dahiya and Oscar Eduardo

@8:10 AM: Ravi Dahiya will play after the current match between Algeria and Bulgaria will get over.

@8:00 AM: We are ready to bring you live updates as World No. 3 Ravi Dahiya takes on Colombia’s Oscar Eduardo Tigreros Urbano in the freestyle 57kg category event.

Dahiya came to limelight with a bronze medal at the 2019 World Wrestling Championships in the 57kg category and qualified for the Tokyo Olympics.

Having recently won 2 golds at the Asian Wrestling Championships, Almaty, 2021, and in New Delhi, 2020, Ravi Kumar Dahiya had beaten European Champion Arsen Harutyunyan in the round of 16 and Japan’s Yuki Takahashi in the quarterfinals to earn a place in the Tokyo Olympics.

On the contrary his 24 year old Colombian opponent Oscar Eduardo Tigreros Urbano big break came when he won the silver in the men’s 57 kgs Pan American Championships in 2019 – Dahiya should not face too many problems in winning the opening bout.