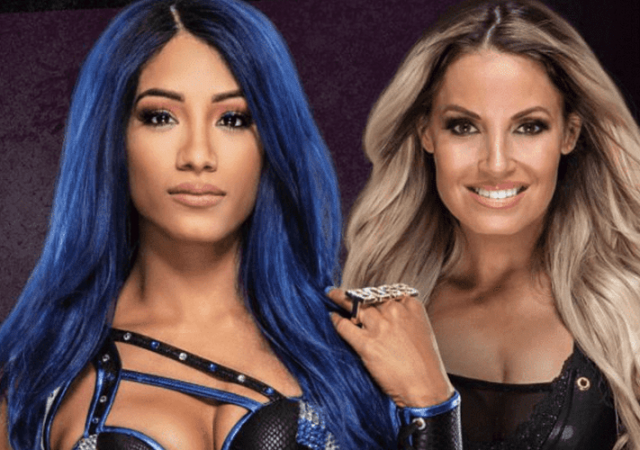 WWE News: In the recent episode of WWE Bump where WWE Hall of Famer Trish Stratus was joined by WWE veteran Mickie James. During the conversation when asked to Stratus for her dream match whom she would kike to face, she said she would be delightful to have a match against ‘the Boss’ Sasha Banks.

The thought of @trishstratuscom vs. @SashaBanksWWE has everyone on #WWETheBump excited and intrigued! A dream match that would be a spectacle! pic.twitter.com/nsLsC0PnPg

” I love and respect Sasha so much. I love her in-ring work. Would I love a taste of that? Yes, I would. Look, here’s the thing. People are buzzing about Sasha and I and we had a, you know, five-minute interaction at the Royal Rumble? That is what began the buzz, you know what I mean? That’s been like two years straight of people buzzing about it and dream and hoping. As a wrestling fan do I think this is intriguing? Absolutely. I think it’s a pretty awesome idea, to be honest. Yeah, so that’s all I’ve got to say about that, guys.”

However, earlier Sasha Banks also dropped a major hint that she would also like to have a dream against legendary superstar like Trish Stratus.

“If I could choose anybody? Trish Stratus. I would lose my mind. But honestly, there are so many people. I would like to have a match with anybody I have not had a match with before. Trish Stratus was the top of the women’s division of her time. She was the best.”

Interestingly, Sasha Banks and Trish Stratus have only wrestled in the ring together twice. Both instances occurred in 2018, one being the Royal Rumble Match and the other being a 10-woman tag team match on an episode of WWE RAW. Sasha and Trish tagged together during their second time being in the same ring at the same time.

However, if Banks and Stratus face off each other in a dream match that would be flabbergasting to watch out since both the superstars known for ruling over the Women’s division in their own way.