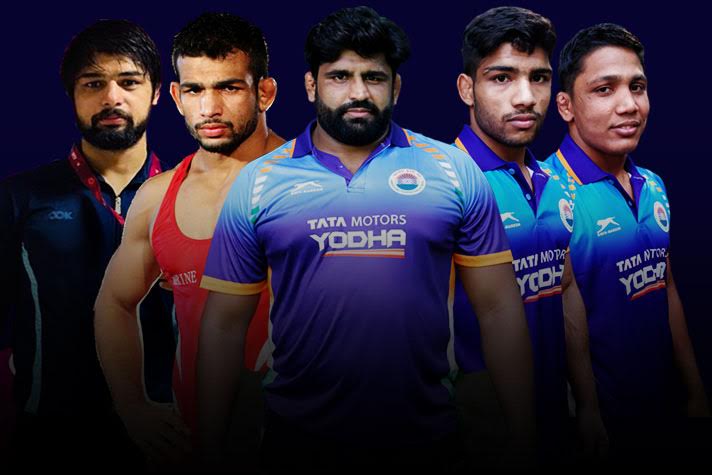 Jalandhar, November 29: Railways dominated the proceedings as Sumit and Satyawart Kadiyan clinched gold medal and their place in the upcoming South Asian Games (SAG) on the opening day of the Tata Motors Senior Wrestling National Championships in Jalandhar on Friday. Jalandhar is hosting Nationals after 14 years.
Commonwealth Games gold medallist, Sumit was the first wrestler to finish on the podium after a 5-0 win against Maharashtra’s Abhijit, who had no answers to the tactical superiority shown by the Railways’ grappler as he settled for a silver in the 125kg category.

Kadiyan extended Railways’ dominance when he defeated Kapil Chaudhary of Uttar Pradesh 9-0 in the one-sided final bout in the 97kg category.
The most sort after fight of the day, though, was in the 74kg category as seasoned wrestler Parveen Rana of the Railways took on talented young wrestler Gourav Baliyan of Uttar Pradesh. The duo put up close fight before the experienced Rana went down in the finals 3-5 to settle for a Silver Medal.

Continuing the fine form, U-23 World Championship silver medallist, Ravinder displayed sheer grit and confidence as he bagged the first gold medal for the Services with a dominating 12-2 win over Sonaba Tanaji of SSCB in final of the 61kg category. With this win Ravinder has also ensured a place in the South Asian Games.

However, the most thunderous bout of the day was the semi-final of the 70 kg category in which Naveen of Jharkhand, despite being bleeding profusely due to nose injury, put up an undaunting performance for a win over Naveen from Services. Making a remarkable recovery in no time for the final showdown as the Chhatrasal wrestler went on to win the gold after defeating Haryana’s Vishal.
Second day of the competition will see top women wrestlers in action. India’s best bet for medal at the 2020 Tokyo Olympics Vinesh Phogat (55 kg), Rio bronze medallist Sakshi Malik (62 kg), promising Divya Kakran (68 kg), Seema Bisla (50 kg), Sarita More (57 kg) and Navjot Kaur (65 kg) will try to make an impact.

In its bid to keep the wrestling fans connected with their heroes, www.wrestlingtv.in is streaming the entire Nationals for the first time and will show close to 100 hours of action live over the next three days.