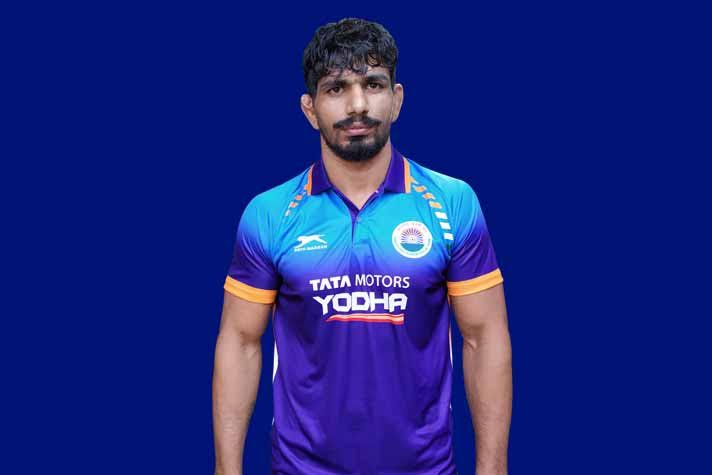 October 29, 2019 0Comments 1014Views 5Likes
India’s Veer Dev Gulia could not continue his good run in the semi-finals of the 79kg freestyle category at the World Wrestling Championships in Budapest, Hungary. 22 year old Gulia tried his best but still was no match for the Abubakr Abakarov of Azerbaijan in the Semi-Finals bout. 2018 World Junior runners up Abakarov won the bout 8-0 against Gulia to book the place in finals.
Gulia will now vie for bronze medal round on the Day 2 of the competition.

We will surely win medals at Tokyo 2020: Geeta Phogat

Before this Gulia defeated DAMJIN Batzul  of Mongolia in one-sided bout by 11-1 in the last-8 encounter and China’s Ligan Chai in the last 16 match-up. Gulia who hails from Jhajjar, Haryana showed his real power and strength against the Chinese. Gulia performing brilliantly outwitted him by 7-2 to book a place in the last 8 of the world championships. Earlier in the opening round, Gulia got better of the host country wrestler Lukacs Botond. In a hard fought bout Gulia prevailed 3-1 against the local hope.

It was the case of so close and yet so far for India’s Akash Antil at the UWW U23 World Wrestling Championships quarterfinal bout. In the 97kg category last 8 bout, 19 year old Akash was up against Danylo STASIUK of UKRAINE. After giving great account of himself in the Last 16 bout against LiXu of China, it was expected to be a cakewalk for Akash but surprisingly it turned out to be heart-break for the Indian.

Akash who has Junior Asian Championship bronze medal to his credit this year started brilliantly and often caught his opponent by surprise initially. But once in groove the Ukrainian was up to the challenge. After going down 1-3, Indian comeback to level the bout at 3-3 and then took a lead of 5-3.

It looked like, Indian will sail through the semi-finals for the first time in his career in any global level event. But Danylo came back strongly to stun Antil in the dying seconds of the bout. Not only he first leveled the scores but took lead just 6 seconds before the final whistle and entered semi-finals.

Earlier Antil performed brilliantly to enter quarterfinals of the world championships. In the last 16 bout Indian easily dismantled Li Xu from China 10-0. Antil was at his best in attack and did not give any chance to Chinese to comeback in match.

Sharvan loses too in the Quarterfinals of 65kg FS
Like Antil, Sharvan has to blame himself for his reckless show & defeat in the quarterfinals. Shravan seeded second in the championship was favorite against Ilman MUKHTAROV of France. But the bout result went against the Indian. Despite of taking the lead, Indian lost his grip on the bout as French came from behind to stun the Indian in the quarterfinals.

Sharvan’s last 16 bout was against Rifat Saibotalov of Kazakhstan where according to his billing he dished out absolutely brilliant performance. Sharvan gave display of very attacking wrestling to defeat the Kazakh 8-6 and book his place in the quarterfinals of U23 World Wrestling championships. Sharvan was down 4-6 at one point of time but came back strongly to defeat the Kazakh.

Qualification Round – 70kg – Naveen (Ind) vs Valiev Chermen (Russia)
In the 70kg freestyle opening round, India’s U23 National champion Naveen was no match for the Russian number 1 Valiev Chermen. Chermen was so dominating in his performance against the Indian that the bout did not even last 1.30 secs. With-in no time the champion from Russia overpowered Naveen to win the bout with-in 90 seconds by 11-0.

Qualification Round -57kg Naveen (India) vs Dauman Ahmet (Turkey)
Like his namesake in 70kg, in the 57kg freestyle category Naveen from India easily lost out to Duman Ahmet from Turkey. Naveen was no match for the Turkish wrestler and lost out 11-0 with-in no time to the national champion from Turkey.

WrestlingTV will bring all the action LIVE from Budapest, Hungary for its fans. Stay tuned and log in to WrestlingTV.in for LIVE telecast, news & views on the U23 World Wrestling Championships 2019.