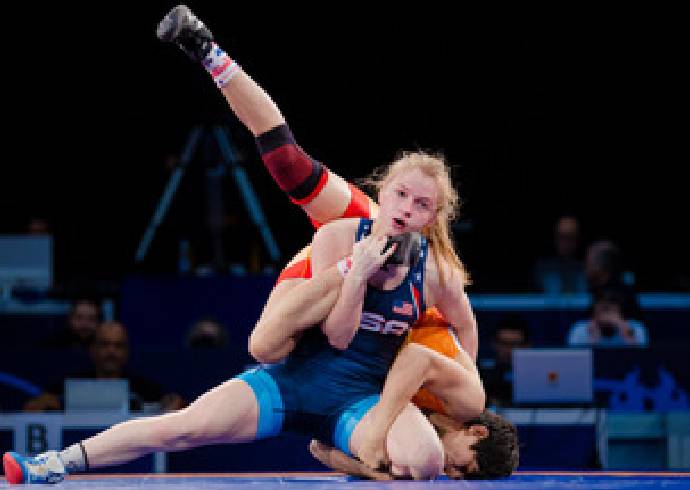 U23 World Wrestling LIVE – Shivani Pawar Wins Silver: Indian wrestler Shivani Pawar lost the U-23 Worlds final to Emily Shilson of USA. She had an early lead but was pinned down by the junior world champion in the 50kg division bout in Belgrade on Thursday. The 20-year-old Wilson joined a small group of wrestlers who have won two world titles in the same year. Earlier she won a Junior World Championship Gold. On the other hand by finishing second, Pawar became only the seventh Indian to win a silver at the U-23 Worlds after Ravi Dahiya and Bajrang Punia.

‘I am extremely happy’ said the Indian after winning the historic Silver. ‘I will try to improve on performance in future and attempt to turn this into a Gold for India’, said Shivani

Shivani Pawar Wins Silver: On the road to the final, Pawar beat Belarus’ European silver medallist Anastasiya Yanotava, Ukraine’s Tetiana Profatilova in the quarterfinal and reigning U-23 European champion Mariia Tiumerekova of Russia in the semifinal. Anju defeated Canada’s Virginie Gascon 17-6 on technical superiority to win bronze – the second medal for India at the event – in the 55kg category.

U23 World Wrestling LIVE – Shivani Pawar Wins Silver: To say Shilson is good is an understatement. The 20-year-old Wednesday joined a small group of wrestlers who have won two world titles in the same year.

The USA wrestler made the trip to Ufa, Russia in August for the junior world championships and dominated her way to the title, something similar to what we saw in Belgrade. In her four matches, Shilson never looked in trouble and won her bouts 10-0, via fall, injury default and a fall.

“Two years ago I did not win a medal at this tournament and now I have so felt awesome,” Shilson said.

In 2019, she finished 11th but did not make any mistake now even after a frantic start to the final against Shivani PAWAR (IND).

Shilson tried to strike early in the first with a single leg, but it was countered by her Indian opponent. While trailing 2-0, she hit a far side headlock and pinned Pawar less than 90 seconds into the opening frame.

Being one of the most active wrestlers in the US, Shilson was aware of the situation the Indian could have put her.

“I knew she was going to be like that be like that, she just wanted scramble,” Shilson said. “I had to get back up, refocus, and get to where I wanted to be, and then I was able to take what she was giving me.”

Shilson will be one of the wrestlers to watch out for as the Paris Olympics approaches and she thinks that she is on the right track in her career.

“In Ufa, I was one of the oldest wrestlers there, and here I am probably on the younger side,” she said. “Being able to go from juniors and step up on another level, U23 is reassuring that I am on the right track.”