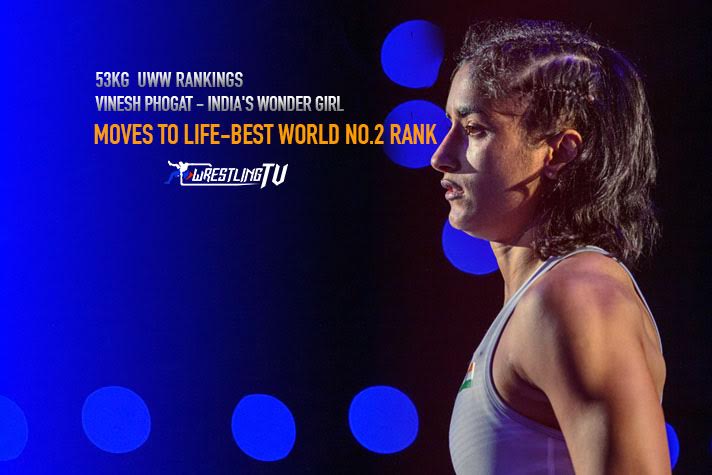 September 27, 2019 0Comments 1752Views 2Likes
India’s wrestling pride Vinesh Phoghat is now the new world number 2 in the UWW rankings chart. Vinesh won bronze for India at the recently concluded wrestling world championship at Nur-Sultan. This was Vinesh’s first world championship medal and this is also the first time that India’s wonder lady has occupied the number 2 spot in the world ranking charts in the 53kg weight category.
Vinesh through her performance at Nur-Sultan also qualified for the Tokyo 2020 Olympics. And if Vinesh can maintain her rankings till Tokyo 2020, she can ensure little easier draw for herself at the Olympics.
Vinesh lost to Mayu Mukaida of Japan in the second round at the world championships but came back strongly to win bronze through the repechage round. In the bronze medal fight 2018 Asian Games gold-medallist, defeated Maria Prevolaraki from Greece in a very tough bout. During her journey at the world championships 2019, the wrestler from Haryana was more defeated the likes of Yuliia Blahinya of Ukraine, world number 1 Sarah Hildebrandt of USA and Sofia Mattsson of Sweden.
Wrestling fans can catch Live Streaming, Highlights, News, Videos, Photos, Results and Rankings on WrestlingTV
This is the first world championship medal for the Asian games 2018 gold medallist. This is the 3rd world championship medal for the Phoghat family as Vinesh’s cousin sisters had already accomplished this feat twice. For India both Babita & Geeta Phoghat have won the world championship bronze medals in the year 2012.
The top spot in the world ranking chart is occupied by 2019 world championship gold medallist  Yongmi Pak of North Korea. Pak surprised everyone by defeating strong favorite Mayu Mukaida of Japan at the world championships