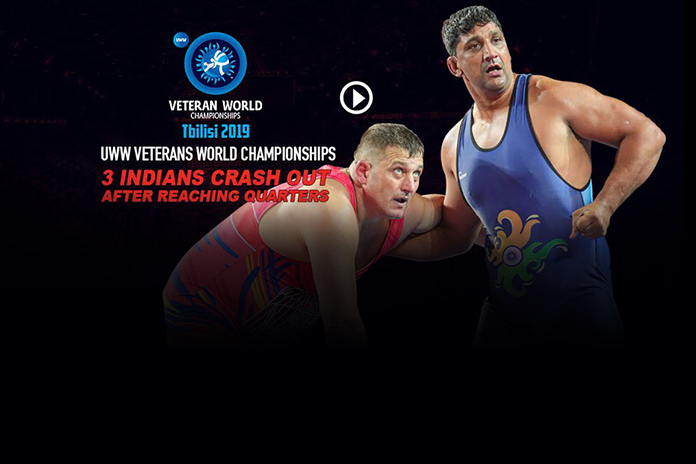 At least three Indians made it to the quarter-finals on the opening day of the UWW Veterans World Wrestling Championship in Georgia. But they failed to make the most of the opportunities at hand, crashing out of the Greco-Roman competiton.

Each of the four Indians on the mat on Tuesday made it to the repechage round, but all failed to live up to high expectations when it mattered the most.

Seasoned pro Kripa Shankar Patel, who is participating both in the Greco Roman and Freestyle events, made an impressive start in the 70kg Greco Roman event. He started off with an impressive 8-0 win over Coratias’ Aleksandar Stojic. But lost the next two bouts – in the quarter-finals to Azad Mohammadsaeid ALIMOHAMMADPOUR of Iran and then  on the repechage opportunity to Orhan TIKAC of Turkish and crashed out of the medal hunt.

Must Read: Why has SAI dropped me? Why my one failure is held against me? Why an Olympic Medallist is treated this way?

Now, Kripa Shankar will turn up in the freestyle competition, which is his main event, on October 11.

In other action, Dheeraj Kumar lost his last-eight round bout of the 100kg Greco Roman category to Mario FRUEHWIRTH of Austria, after having started with a win over Ionel Iulian BOJOAGA of Romania with a 10-3 technical superiority verdict. As the Austrian lost his next match, Dheeraj failed to get an repechage chance.

In yet another 100kg category competition, India’s Sanjay Kumar did get a second opportunity to play repechage after going down 0-8 to his superior opponent from Russia, Aleksandr Sergeevitch ARKHANGELSKII. He yet again failed to make the most from the second opportunity as Iran’s Behrouz Ghassem KARIMI won the repechage round by fall.

In the 88kg catgory, India’s Jadish Kumar crashed out with defeats Shmagi GOKADZE of Georgia (quarter-finals) and  Nurlan MOLDABEKOV of Kazakhstan in the repechage round.