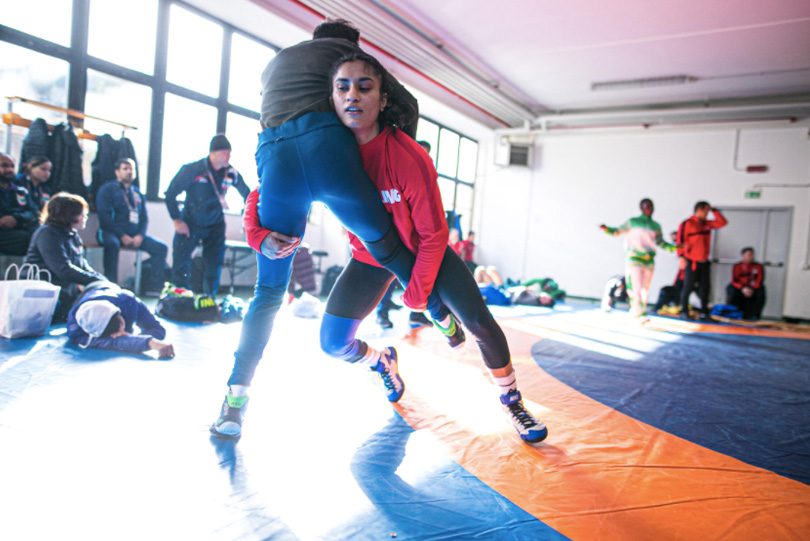 Vinesh Phogat, 26, is currently training in Hungary with her coach Woller Akos. Phogat is working towards fulfilling her new year resolution and her long-time dream of winning an Olympic medal. The Indian wrestler missed out on it due to a knee injury at the 2016 Rio Olympics. However, with her newfound zeel after moving up to 53kg, the Haryana-born feels she is in better shape to win a medal in Tokyo.

She is working on adding new moves to her arsenal at Vapas Sports Club, Budapest. Her coach, Akos reckons it would be good if she can learn the new technique in time but before that she needs to get back to get her basic movement back. “I would like a new technique on the ground but first I need her basic techniques to come back,” the Hungarian coach told WrestlingTV in an exclusive interview.

Phogat was sanctioned a 40-day-long training camp for the Tokyo Olympics in Poland and Hungary. The approval was given under the Target Olympic Podium Scheme (TOPS) — the Indian government’s flagship programme dedicated to identifying Olympic medal hopefuls and helping them train by providing them financial and infrastructural aid. The European camp, they feel, would give her an opportunity to brush up her skills after a long gap due to COVID-19 and spar with many wrestlers in her weight category.

“As a wrestler, I need to know my level, and getting spar with good wrestlers will be very helpful in assessing where I stand,” Vinesh said about the camp. The camp will also give her a chance to practice the techniques she learnt in her last training stint to tackle Japan’s Mayu Mukaida.

The tenacious World Championship bronze medallist had attended a camp in Norway before the lockdown in March last year. Fresh from a loss by Mukaida in the Asian Championship in February, the training camp proved to be very resourceful for her. Phogat, who has already qualified for Tokyo Games, trained with multiple time Japan’s world champion Haruna Okuno. Training sessions with the Japanese wrestler gave her an insight into the wrestling style of her nemesis Mukaida. According to Akos practising in the Japanese style, wrestling helped the Indian champion.

“Mukaida is good but with each passing competition, we are getting closer to her. There were two Japanese wrestlers at the camp and Vinesh practised with them, especially U23 World Champion Haruna Okuno. Practising in the Japanese style wrestling was very useful and can help us overcome the Japan competition,” he said. But for now Akos is focussed on getting her moving properly on the mat.

“She is working very well now. She is coming back to the top performance slowly. The main focus is on physical performance and the basic techniques,” he added.

Akos believes Phogat is lucky to have qualified for the Games as this has given her more time to prepare unlike most of other India’s Olympic hopefuls who had a poor show at the Individual World Cup. India had managed to win just one medal — Anshu won silver in 57kg — in Serbia. Vinesh had skipped the tournament because most of the big names of her weight class like Jacarra Winchester, Mukaida and Pak Yong-Mi withdrew from it. She believed without these heavyweights there will be a lack of competition and therefore focussed on training instead. Akos says that their main focus is the Olympics and other tournaments on road to it will act as the Asian Championship bronze medallist’s testing ground.

“We are lucky because she has qualified. We have more time for preparation. Until the Olympics, we build the preparation that way we have only one main competition. The others only prepare for competitions. These competitions will help us for the top performance in Tokyo!!! She knows this and understands this!!!”

In the coming six months before the quadrennial tournament, Phogat is scheduled to participate in five tournaments starting with XXIV Outstanding Ukrainian Wrestlers and Coaches Memorial competition in Kyiv from February 4 to 6. Her last competition before the Games will be the Grand Prix in Spain from July 3 t0 4.

“We are in Budapest until 24 January. After which we will travel together to Poland for a big international camp until February 4. We have set sight on five competitions namely XXIV Outstanding Ukrainian Wrestlers and Coaches Memorial competition (26-28th February in Kyiv), Matteo Pellicone Rome Rankings (4-7th March in Rome), Asian championship (13-18th April in Kazakhstan) Poland Open (8-13th June in Warsaw) and, Grand Prix (3-4th July in Madrid),” he concluded.