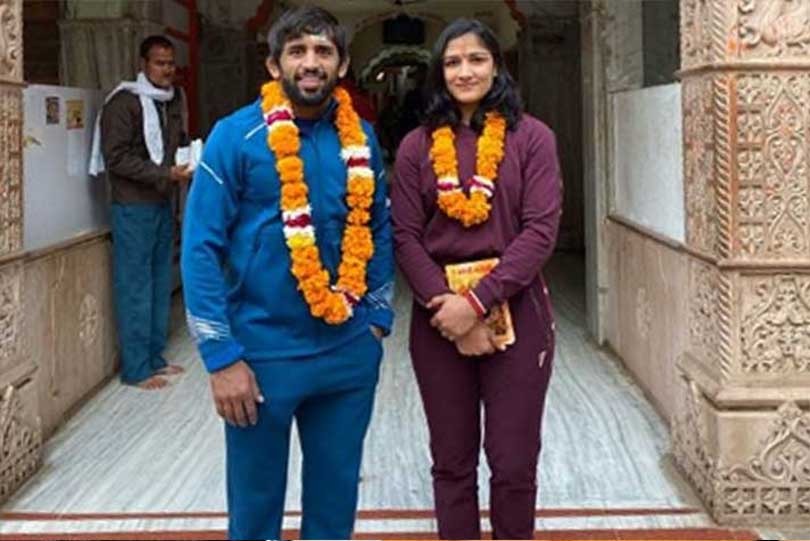 Sangeeta Phogat and Bajrang Punia now spend time playing ludo king or sometimes talk on a video call. This is the new norm for the power couple of Indian wrestling amid the nationwide lockdown due to Coronavirus pandemic. The outbreak of the virus has also played spoilsport on their wedding plans.

The couple was scheduled to get married this year after the Olympics in August. But given the current scenario and the Tokyo Games rescheduled to July 2021, there is a possibility that the marriage will get deferred to next year. Sangeeta, however, is optimistic that their wedding plans might go as scheduled. But she also realises that it would be hard in the current situation and therefore has left things on the elders to decide.

“Yes, there is one per cent chance that we might get married this year itself but I realise how the situation is and the final call will be of the elders,” she told WrestlingTV.

“We (Bajrang and I) do not talk about marriage a lot. He is focussed on the Olympics and is working hard for it. He has my full support and the wedding can wait if it has to”.

But how exactly this Love story started? Sangeeta says her love story with Bajrang started only after moving to Sonepat.
The 22-year-old grappler initially started her wrestling career just like her other sisters- training under her father Mahavir Phogat. But later she moved to Sonepat along with her sister Geeta and Babita to train. It is there the Bajrang and Sangeeta story started.

Sangeeta is currently staying with her elder sister Geeta Phogat at her home. She takes care of her and helps her in the household chores as the latter recently gave birth to a baby boy. Besides this, she also trains twice a day intending to make a comeback to the mat.

“I am eyeing for a comeback as now the time is my biggest ally”.

The 22-year-old had suffered an anterior cruciate ligament (ACL) tear last year and was doing rehab currently. She says “had the Olympics been held this year, I could not have made a comeback. But now I will make a return in the 62kg”.

She says that Bajrang is a big help to her. “He keeps me motivated and also helps in my training”. Sangeeta along with Bajrang is not worried about what the future holds for her in terms of marriage. All her focus is on the return to the mat and ‘besan ka halwa’ (Gram flour dessert) which Bajrang has promised her.

“He has told me that he will cook besan ka halwa for me when we meet next. For now, we play ludo with Geeta and her husband Pawan and Babit and her spouse Vivek,” she says.