Women World Cup wrestling : It is Japan vs USA for the Gold Medal match 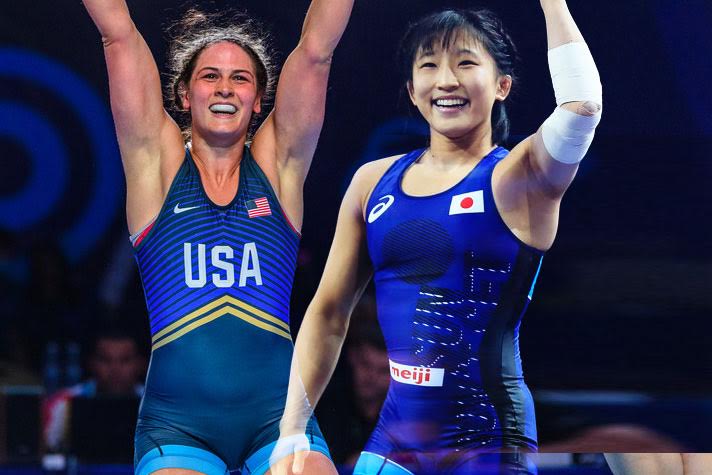 November 16, 2019 0Comments 1615Views 0Likes
The Wrestling World Cup for women in Narita, Japan has got its two finalists. As expected, hosts and defending champions Japan and United States of America will contest for the gold medal and the world cup trophy on Sunday. USA defeated Mongolia 6-4 to make it the gold medal tie and Japan thrashed China to reach the finals.
Japan-USA clash will be played on Sunday evening and will be streamed LIVE on WrestlingTV.in. Japan will try to win their sixth consecutive world cup trophy and USA will attempt the first victory after title triumph in 2003.
USA defeats Mongolia 6-4
The American team which came to Japan with high hopes and 3 world champions in their squad wrestled true to their potential to defeat tenacious Mongolian squad. 5 time world champion Adeline Grey,  Tamyra Mehsah once again did the star act for the American team. USA started with bang against the Mongolian team when both Whitney Conder and Sarah Hildebrandth won their bouts. With USA leading 2-0 in the 10 bout tie, Mongolia made a superb comeback by winning the next 3 bouts led by the world championship bronze medallist from Mongolia Bolortuya Ochir. Ochir created a huge upset when she got better of the reigning world champion Jacarra Winchester.
With scoreline reading 2-3 in favor of Mongolia, Kilty, Molinari & Mensah won the next 3 bout to register victory for the American team. In the 9 bout of the tie, Mongolia pulled one back as Amar defeated Victoria Francis of USA. In the last and final bout of the tie, 5 time world champion Adeline Gray quashed all hopes of Mongolia by giving dominant display. Gray thrashed Ganbat 10-0 to win the tie for USA.
With this victory USA will now challenge Japan in its quest for GOLD MEDAL at the world cup. Earlier in the first round American girls defeated Russia 8-2 to register their first victory at the 2019 World Cup.
Japan thrashed China to make it to the FINAL battle
Before the world cup, everyone had one question on their lips – can anyone stop Japan this time ? At least the day 1 performances showed, it is unlikely. Japan once again is proving unbeatable at the women world cup. Japan vs China was built as virtual clash of titans, but it proved to be otherwise. Japan was so dominant in its performance that they won the first 6 bouts of the tie to seal the GOLD MEDAL match spot for the host team. Rong Ninging, Sun Yan – no one had a answer to the power of Japanese wrestlers. Yui Susaki, Okuno, Risako Kawai, Inagaki, Yukako Kawai all won their bouts easily to register victory for the Japan team. Once the scoreline read 6-0 in favor of Japan the defending champions took foot off the paddle to give some respite to the Chinese squad as they register consolation victory in the last 4 bouts.
Earlier Japan and China both had defeated Ukraine 9-1 in the opening round encounters in the morning session. Japan will now contest against USA for its 6th consecutive Gold medal and China will play Mongolia for the bronze medal bout. Russia will face Ukraine in the battle for 5th place on Sunday, 17th November. Watch the entire action LIVE from Narita, Japan on WrestlingTV.in