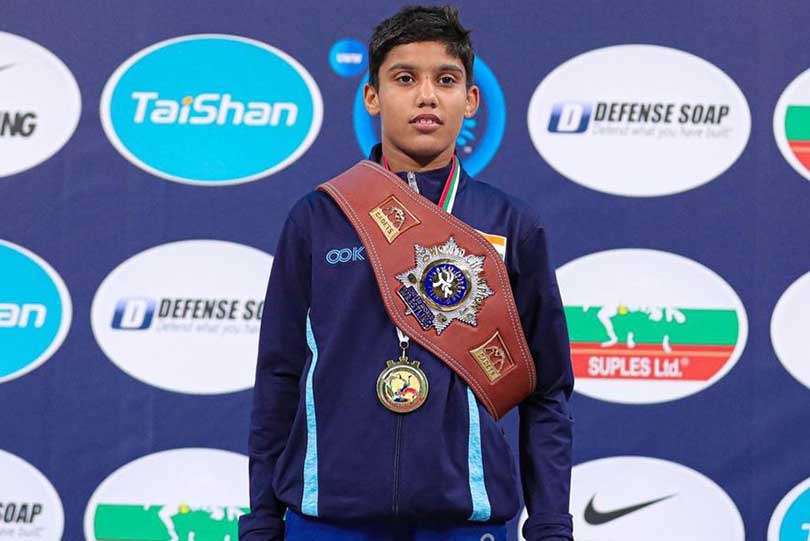 Komal, 15, is the current cadet world wrestling champion and hails from an extremely humble background. Her father, Satish Kumar is a migrant worker and does odd jobs to earn a living for his family. Covid19 has hit the family hard. Such is the condition of the family that leaves aside proper diet for the champion daughter, they are barely managing three-time meals in these extremely testing times.

“We are a family seven – two older sister and one younger brother and sister – and this lockdown is very hard on us. My husband is a daily wager and due to no work, there has been no source of income” — said Kusum Lata, Komal’ mother to WrestlingTV.

The Haryana wrestler who hails from Panipat won the Cadet World Championships in Sofia, Bulgaria in 2019 in the 40kg category. But the lockdown has played spoilsport to all her plans for the 2024 Paris Olympics. Despite all the odds, she is still training at home but surviving on the diet of cucumbers and fruits nowadays.

“There are problems but I am still training towards my dreams”. this is what the shy Komal could say after much coaxing.

“It has never been easy for us. Providing her with the diet of an athlete has always been a problem as we cannot afford it. But we have always tried our best”. “Even now, she is surviving on cucumbers to fulfill the requirement”, chipped in Komal’s mother.

Born and brought up in a small village in Panipat, Haryana, the teenager is one of the brightest talents of Indian wrestling. She began her wrestling journey in 2017 and made her real presence felt in 2019, the year when she won both the Asian Championship and world championship medals.

Her tryst with the sport of wrestling started at Baba Gyan Ram Akhada where she used to go with the family members to watch dangals.

Her mother says “initially the kids of the akhada would bully her and beat her up when she used to go and watch the match. And it had become like a norm. Then one day she told her father she wants to learn wrestling and that is how her journey began”.

The incident proves how tough the frail-looking Komal is. Her coach Krishan swears about her toughness and discipline. She is very disciplined and hardworking. She was a natural and picked up thing easily,” coach Krishan. “Her strength lies in takedowns and as the match progresses she keeps switching her tactics which makes her deadly and she never gives up” coach added

Komal once again is not giving up in this battle of life. Putting aside all the constraints of life, the Haryana girl still dreams of becoming the next Sakshi Malik – India’s first women Olympic medallist. She is still training twice and sometimes even thrice a day at the local akhada in her village. “I am working on my endurance and do body-weight training for now. My coach is helping me too,” she says.

Any difficulty notwithstanding, “She is very passionate and dreams of the Olympic glory,” concluded her mother.