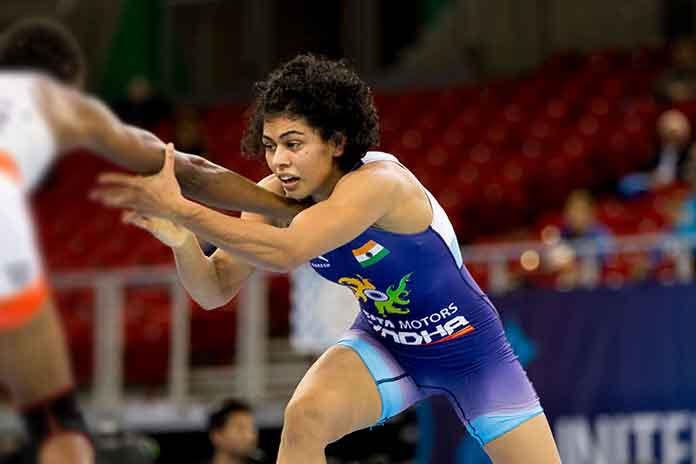 With only three wrestlers competing in the 53kg, Vinesh had to wrestle with just one rival and she emerged a 9-0 winner against Pinki in the final bout.

The only difference from Vinesh’s earlier bouts was that this time there was no early win by technical superiority for her and she had to fight for full six minutes.

The 57kg was the toughest category of the day with Pooja, fast-rising Anshu Malik, world number four Manju and Sarita in the fray.

Pooja began with a win by fall over Rani Rana but was stretched in the semifinal by Anshu. She was trailing 2-4 till the last minute but a timely two-point move put her level with the young rival, sending her into the final.

It was not the same confident Pooja who has made impressive progress in the last one year.

Anshu lost but was very impressive. She almost pulled it off but Pooja’s experience and her ability to produce smart moves at crucial junctures saved her.

Sarita, on the other hand, came out all guns blazing and despite suffering a knee injury after 52 seconds into the final bout, she emerged stronger.

It was a battle of both physical and mental strength. Unable to get the better of Sarita’s dogged defence, Pooja was looking at her camp for guidance but nothing worked.

Sarita, who won a silver at the Asian Championship in 2018, stood out with her mental strength as well as her solid defence. She attacked a number of times but holding off Pooja worked well for her.

“I had worked on her game. We both know each other pretty well. Whenever I have been defensive, I have not done well. So being aggressive throughout was key today. Pooja has a big game, so I am pretty happy with the result,” Sarita told PTI.

Asked about the status of her injury, she said it has to be assessed.

“I don’t know what it is. If it was a cramp, it would have been alright by now. But I am still limping,” she said.

Sarita conceded that at the world stage, her rivals are a notch above her, both on fitness and on technique.

“I definitely have to work harder but I see myself a contender,” she said.

There was an upset too in this category with world number four Manju losing 3-4 to Mansi, who was knocked out in the semifinals by Sarita.

In the 62kg, Rio Olympic bronze medallist Sakshi needed just 58 seconds to beat Ankita and less than one period to nail Reshma Mann in the final bout.

Sakshi, who of late has found some form, looked much at ease on the mat.

In the 68kg, Divya Kakran impressed with her brute strength on her way, sealing a berth in the World Championship.

The other two Worlds places were taken by Kiran in the 76kg and Seema Bisla in the 50kg category.

The World Championship will be held in Kazakhstan from September 14-22.

The trials for four other non-olympic categories will be held in the second week of August.

No exemption for Vinesh, Bajrang from Worlds trials: WFI