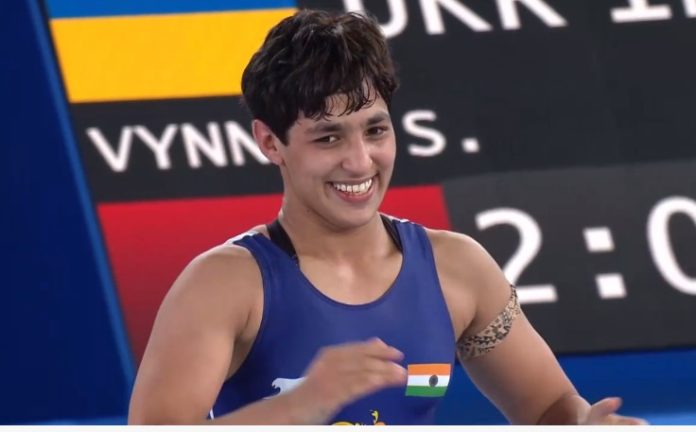 This has assured India of its first medal at the ongoing Championships. She dominated the bout right from the start to gain a 2-0 lead within a minute after an incredible takedown.

After gaining a 2-0 lead, Anshu Malik kept the pressure n the Ukrainian with some aggressive moves and doubled her lead going to the break.

The second half was pretty much the same as the Indian continued her offensive moves to dust off the semifinals 11-0 and win by technical superiority. So far, all of India’s five medals in the women’s section of the World Wrestling Championship have been bronze.

In the 72kg, Divya Kakran stunned Kseniia Burakova with a ‘win by fall’ but lost by technical superiority to Japan’s Under-23 World champion Masako Furuich.

The 2020 Asian Champion Divya fought her heart out in both the bouts and wriggled out of difficult positions umpteen times but hurried moves and over-aggression cost her the quarterfinal against the Japanese.

Meanwhile, Kiran (76kg) won her repechage round against Turkey’s Aysegul Ozbege to reach the bronze play-off but Pooja Jatt (53kg) lost her repechage by fall to Ecuador’s Luisa Elizabeth Melendres.

Ritu Malik (68kg) was blown away by Ukraine’s Anastasiia Lavrenchuk in the Qualification bout that lasted only 15 seconds. It seemed Ritu was carrying a knee injury.