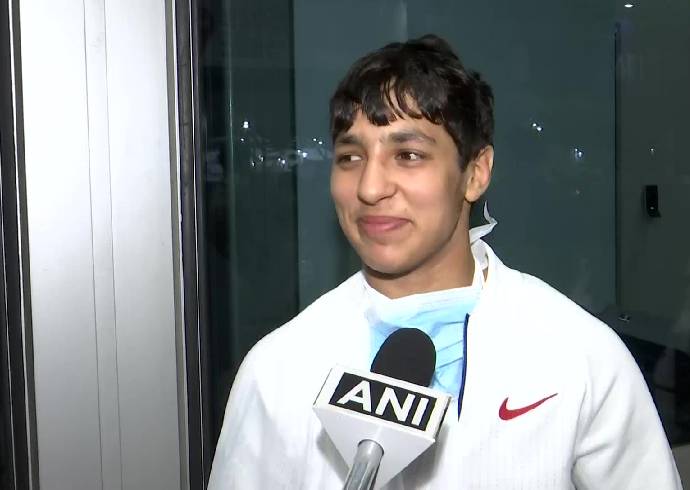 Tough day for Greco-Roman wrestlers, Gyanender only wrestler to move past qualification round

Speaking to ANI at the Delhi airport, she said, “I am extremely elated to have won a silver medal for India. I could not win a gold. Struggles are always there, especially in a sportsperson’s life. I got injured before my bout. Nevertheless, I will do better next time. For now, I will take some rest and then start preparing for the Commonwealth Games and the Asian Games.” Anshu Malik scripted history on Thursday as she became the first Indian woman to win a silver medal in the World Wrestling Championships.

Delhi | Wrestler Anshu Malik arrives home after becoming the 1st Indian woman to win silver medal in Wrestling World Championships. “Elated to have won silver for India. The struggle is always there…Got injured before the bout. Nevertheless will do better next time,” she says pic.twitter.com/fEB1ElvYpw

Coming into the match after becoming India’s first-ever woman finalist at the World Championship, the 19-year old Anshu began on an aggressive fashion with positive intent but eventually lost the summit clash after being pinned.

However, she was unable to get the ultimate prize against the American champion who defeated her via fall. Anshu had to be given some medical attention after she felt a slight pain in her arm.

World Wrestling Championship: However, Anshu has scripted history by winning a silver medal at the World Championships in Oslo, Norway.

India will have to wait for its first woman world champion in wrestling as Anshu Malik settled for a silver medal after losing her 57kg final to 2016 Olympic champion Helen Lousie Maroulis but Sarita Mor grabbed her maiden medal at the big stage by winning the 59kg bronze on Thursday. Follow all World Championship LIVE Updates on WrestlingTV