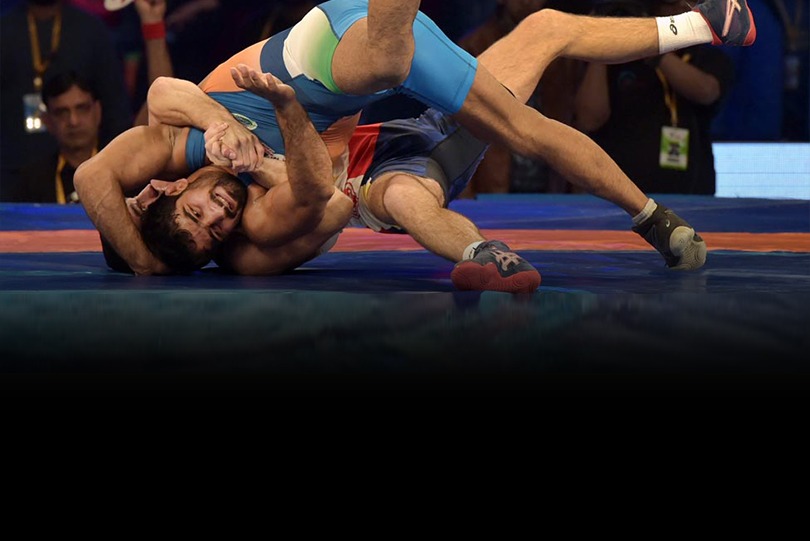 July 11, 2020 0Comments 192Views 0Likes
Countries across the world have resumed their training for the Tokyo Olympics. While some have restarted sparring others are taking it slow and have only allowed individual training at the moment. With just one year to go for the quadrennial extravaganza, the question remains is when will India begin its preparations? The camp, Kripa Shankar, former wrestler turned coach says, should be started after taking all precautions. “It has been three months now. The wrestlers have been working on their stamina and fitness but the real training in wrestling is sparring. Therefore, we should start the camp after taking all the precautions. We should quarantine them first and after 14 days, they should be allowed to return.
World Wrestling Stars – Indian wrestling still in shutdown
The Sports Authority of India (SAI) reportedly is aiming to restart the camp and had directed the Wrestling Federation of India (WFI) to take wrestlers opinion before taking the final call. The elite grapplers have expressed their reservations in returning citing the ongoing crisis. Olympic medallist Sakshi Malik and world medallist Pooja Dhanda have already expressed hesitance due to the current condition, young wrestlers like Anshu Malik, Sonam Malik and Divya Kakran are also afraid of returning to the camp.

“The situation is still bad and therefore I am not ready to join the camp for now,” says Asian Championship bronze medallist Anshu Malik. “Even if we return to the camp we would have to go out to get stuff and that would get us in danger. I had received the call from the federation, and I said ‘no’ to them,” she said adding that it would be wise to hold the camp next month.

The wrestlers, Shankar says, are scared to return and WFI must gain their trust. “There are many wrestlers who want to return to the national camp. WFI should resume it as soon as possible. Once things start getting back to normal, those who were scared will also come back eventually. This is the best way to gain trust in the current situation.

He also gave a few suggestions which WFI should follow to keep the SAI centres covid free. One of them is to have dedicated people for specific purposes. “There should be two people dedicated to the purpose. They should only be allowed to go out and bring essential items. The same way there should be other people for different jobs,” he told WrestlingTV adding that if any wrestler leaves the camp without valid reason he should be asked to leave for violating the rule.

SAI will reportedly take the final call next week. While the uncertainty continues to loom over the national camp, the Indian wrestlers have decided to make their makeshift training bases. Asian champion Divya Kakran is currently training in Himachal Pradesh, while Bajrang Punia and Jitender are sweating it out at Inspire Institute of Sports (IIS), Karnataka.

Why is it important for India to restart the camp soon?

Indian wrestlers were in good form and were amongst the favourites to qualify for the Tokyo Olympics. But with the games postponed all the plans were put on the backburner. Now, however, with Asian Qualifiers fast approaching, a tournament would be a great way to get use to competitions. And United World Wrestling’s (UWW) decision to host the World Championships in December in Serbia is the way forward. But to give the best, they need to resume training as soon as possible and gain their competition fitness back.

In July, Iran will resume its club championship. The rules for the competitions will remain unchanged — “no more than three collections of Iran and no more than two legionnaires in the team (Sic.) ” The tournament will be held behind closed doors.

Turkey:
In early June, the Turkish national teams in freestyle, Greco-Roman and women’s wrestling resumed training. Only the wrestlers in the Olympic weight categories and up to three athletes per weight have been allowed to attend it. Mat training is prohibited – so far, the focus is exclusively on general physical training (GP).

Germany:
Almost the same situation. Wrestlers work in clubs, but the emphasis is not on work on the mat, but on the general physical fitness area. The training camp of the team has not yet started.

USA:
In America, each state has its own rules. For safety reasons, mat training is prohibited for now.

Bulgaria, Romania, Serbia, Macedonia, Moldova
The teams were allowed to call wrestlers at the Olympic bases. But so far only team leaders are working. Before returning to training, they underwent tests for coronavirus.

Georgia, Azerbaijan, France, Armenia, Latvia
Only those athletes who have secured the berth for the Tokyo Olympics 2021 have received access to the bases.

Belarus
The quarantine mode was not entered, the training did not stop.

Russia
The resumption of training camp has been scheduled for July.